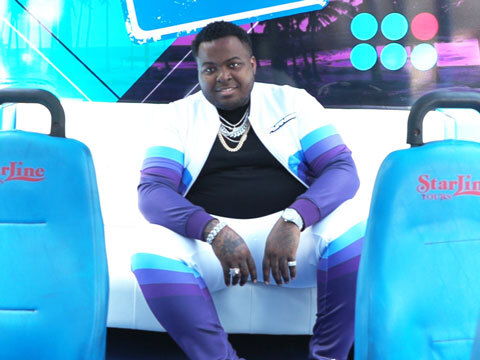 Although Sean Kingston has been in the music game for well over a decade now, it's hard to believe he's not even 30 years old yet! The singer, songwriter, and producer was only 17 when he dropped his debut album, and now he hops aboard the Young Hollywood Tour Bus to give us a close, intimate trip down Memory Lane (or, in this case, Hollywood Boulevard) to reflect in his early days of moving to L.A. to pursue his dreams and hitting it big before he was old enough to vote! During a stop at Hollywood & Highland, Sean expresses his love of the creative energy of the city, which helped fuel his development of his smash-hit breakout single, "Beautiful Girls". We also stop at the (now closed) Supperclub on Hollywood Blvd where he and fellow artists like Chris Brown would observe the vibe and crowd reactions to the music playing there, plus we stop off at Sean's first apartment on Sunset Boulevard where he hustled hard to make it big!