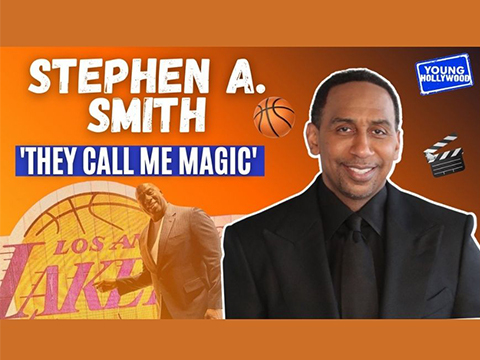 The impact that Earvin "Magic" Johnson has had not only on the sport of basketball but on our culture in general is undeniable, and Apple TV+ is celebrating his monumental legacy with a 4-part docu-series called "They Call Me Magic", which looks deeply at his life and the mark he's left on history both on and off the court. Young Hollywood heads to the red carpet premiere of the much-anticipated project to catch up with those who know it -- and him -- best! H.wood group president and co-founder Brian Toll, who is an executive producer of the series, tells us what it was like to have a pared down production during COVID and what he has personally learned from Magic. Fellow NBA and LA Lakers legend Kareem Abdul-Jabbar describes his former teammate in 3 words. And NBA analyst Stephen A. Smith reveals whether or not he could go 1v1 with Magic and what he thinks the very coolest moment in Magic's life has been! "They Call Me Magic" is now streaming on Apple TV+!