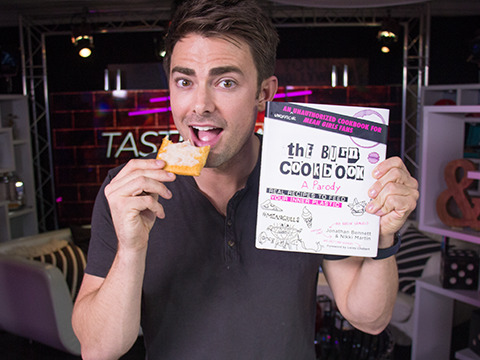 From braving Regina George's carb meltdown to hosting "Halloween Wars" on Food Network, actor Jonathan Bennett just can't seem to escape being around food! He's come a long way since asking Cady Heron what the date was, but he has not forgotten his North Shore High days, so we invite him to the Young Hollywood Studio to celebrate National Mean Girls Day with a 'Mean Girls'-inspired edition of Taste That Ish: What's More $? and to plug his new cookbook, 'The Burn Cookbook', featuring recipes also inspired by the now-iconic teen comedy! With such a sophisticated palette as Jonathan's surely is, we have great confidence in his ability to figure out which of two identical food items is more expensive based on taste alone, including toaster strudel, hot dogs, buttered muffins, and, of course, nutrition bars! Raise your hand if you have ever been personally victimized by a YH food challenge...