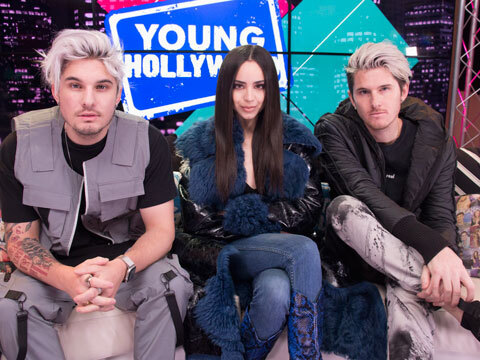 Sofia Carson can pretty much do it all -- whether she's belting out a song from the 'Descendants' movies as the daughter of Snow White's evil queen or showing off her acting chops in "Pretty Little Liars: The Perfectionists", it's clear she was destined to be a star! Now she's sharing the spotlight with EDM duo Kyle and Michael Trewartha, known as Grey, who are coming off their Grammy-nominated collab with Maren Morris, "The Middle". The brother act joins forces with the Disney Darling for the slappin' jam "Grey Area", and all three of them stop by the Young Hollywood Studio to spill all the tea on this epic team-up, including the meaning behind some of the lyrics! Plus, they reveal what other songs they're jamming out to right now, their favorite dance moves, and their celebrity crushes!