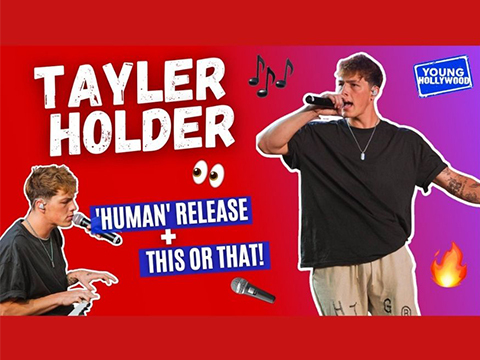 It's not uncommon these days for social media celebrities to parlay their online success into careers in other entertainment fields, like music, but for Tayler Holder, music was always the goal! After making a name for himself on TikTok only a few short years ago and even joining the Hype House and Triller Compound for a bit, Tayler pivoted quickly to his first passion before getting too bogged down in that influencer life. Now, he's releasing a new single and Young Hollywood heads to his L.A. studio to get the scoop and even hear a live performance! Tayler sits down with us and shares with us how he suffers from major stage fright (and why it's worse when he's performing in front of friends and loved ones) and the inspiration behind his new song "Human" and his previously released hit "Never Was You". He also shares his thoughts on being in the spotlight and the drawbacks of growing and making mistakes in the public eye, plus he addresses those notorious facial expressions, and we play a game of "This or That"! Stick around for a brief chat with his producers, Chapters, as well!