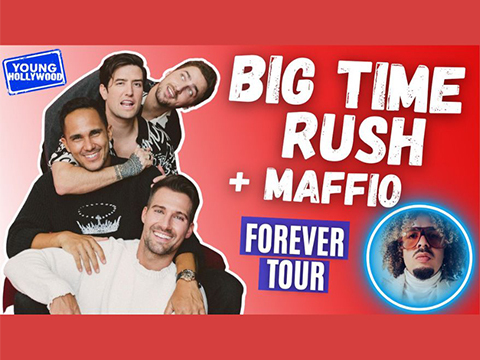 Our early-2010s fangirl hearts could not be stilled when the boys of Big Time Rush announced their official comeback last summer! Now, they just wrapped up their Forever Tour and are getting ready for their sold-out shows in Mexico featuring special guest Maffio, with whom they collaborated on their new and first-ever Spanish language single, 'Dale Pa' Ya!" Having followed the band since their Nickelodeon days, it was only natural for Young Hollywood to hit up James Maslow, Kendall Schmidt, Carlos PenaVega, and Logan Henderson via Zoom to find out more about their massively successful reunion and how their interactions with fans on social media have changed during their hiatus. They also talk about selling out Madison Square Garden, plus Maffio joins us as well to tell us how their epic collab came about and what to expect at their Mexico shows!