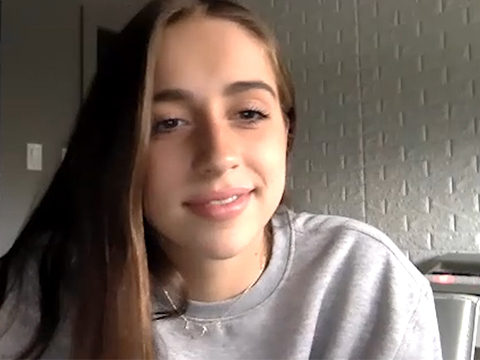 Thirteen must be a lucky number Tate McRae -- at the age of 13, she became a finalist on the 13th season of "So You Think You Can Dance", catapulting the young Canadian talent into the public consciousness and she hasn't stopped since! Of course, being a highly-regarded dancer is a no-brainer when you have a mom who is a dance teacher, but Tate's talents don't end there! She's also dipping her toes into the world of acting and singing, and not even a quarantine is gonna stop her! Young Hollywood chats with Tate via Zoom where she explains how she was able to film her music video for "You Broke Me First" while self-isolating and talks about how glad she is that fans have been connecting with the lyrics of her songs. She also responds to Gunnar Gehl's shout-out in our interview with him (could a collab be on the horizon?!), plus she teases her upcoming second EP and plays a Game of Lasts!