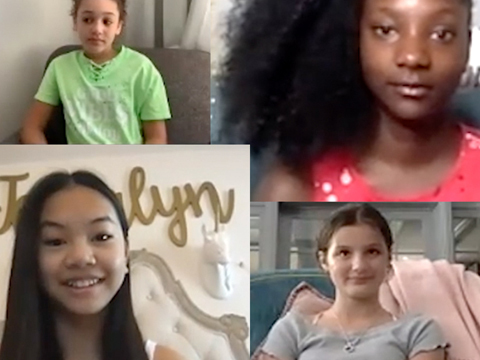 Of all the truths Queen Beyoncé has dropped on us over the years, the most enduring one is the fact that it is GIRLS who run the world, so when four young female social media stars decided to form a girl group, there was only one fitting name -- Run The World! Comprised of Internet personalities Hayley LeBlanc, Kheris Rogers, Corinne Joy, and Jessalyn Grace, Run The World aims to be an empowering voice for young girls everywhere, and as the talented foursome tell Young Hollywood over Zoom, they are more than ready and willing to poise themselves as role models! The "Rainbow" singers also tell us what "role" the fill within their group (à la the Spice Girls), plus we play a game of Who's Most Likely To with them to find out which one of them puts everything on IG Stories, watches their music video on repeat, is always the first to comment on each other's posts, and more!