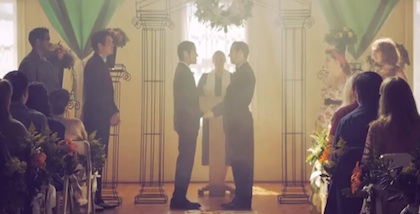 Had he survived, today would have been Harvey Milk's 83rd birthday. Unfortunately, he would not live to see his 49th birthday due to an assassin's bullet in 1978. These days, most folks are familiar with Milk thanks to the 2008 Oscar-winning film Milk, in which the politician and activist was portrayed by Sean Penn, but he's been an inspirational figure to the LGBT community long before such a thing was acceptable. He was a true pioneer and trailblazer.

So, it only seemed appropriate on such a day to post the music video for Macklemore & Ryan Lewis's song, "Same Love", the fourth single off their debut album The Heist. The track, which features Seattle-based singer-songwriter Mary Lambert on the hook, is a fairly straightforward ode to gay rights. Macklemore, an avid supporter of the issue, had been well-aware of what he perceived to be hip-hop music's unsupportive stance on homosexuality in general and decided he had to speak (or rap) about it. Spinning a yarn as only he can, Macklemore came up with a very effective commentary that's a far cry from the relative goofballery of his biggest hit, "Thrift Shop". But it is no less impactful.

As is the music video, co-directed by Ryan Lewis and featuring some of the struggles of the modern-day gay person, including the isolation, disapproval, and legal struggles many still face -- the same causes Harvey Milk was fighting back in the 1970s. Have we really come so far? As Macklemore himself says, "A certificate on paper isn't gonna solve it all, but it's a damn good place to start." As is this song. Cheers, guys!