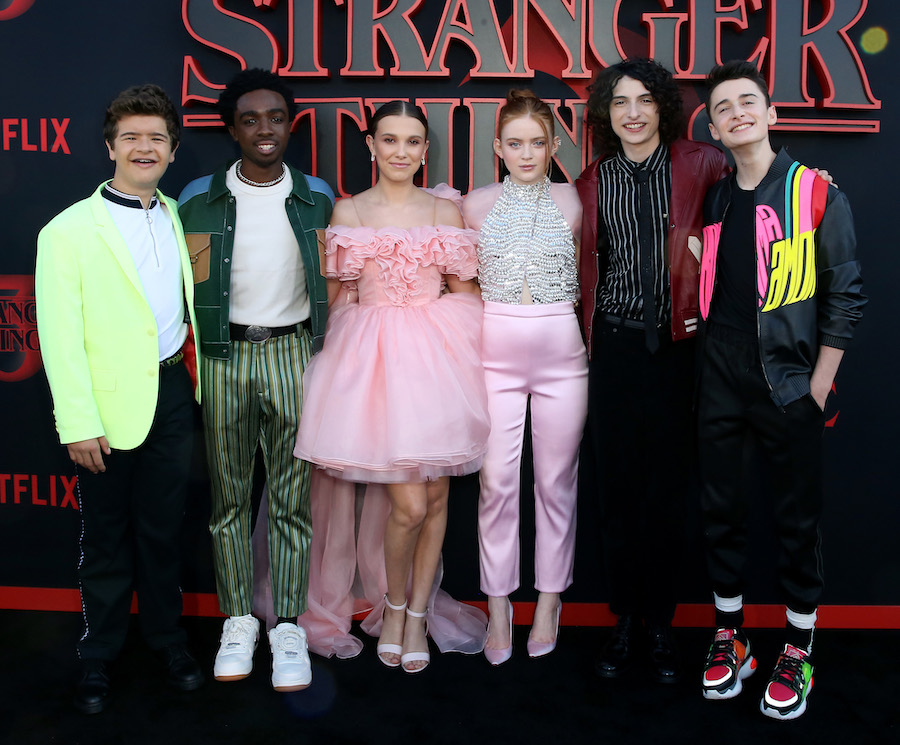 "Stranger Things" made its debut on Netflix in 2016, and it instantly became a mega sensation! The success is only going up from here. Season 4 of "Stranger Things" was divided into two volumes, which the second volume released TODAY (July 1). Not only is "Stranger Things" a successful show, but the cast is also very popular within the fan community. Here are some fun facts about the cast that’ll make you love them even more than you do right now!

It’s no secret that Millie Bobby Brown is British, but do you know how she got that American accent for her role as Eleven? The actress revealed on "The Tonight Show" that the iconic Disney Channel series "Hannah Montana" helped her to perfect the accent. “It’s so good! 'Hannah Montana' is the best. Like, the film, everything. Everything about it is amazing. And I got the American accent.”

In 2018, a fan tweeted to David Harbour asking how many retweets it would take for him to officiate her wedding, and the actor responded by saying, “125,000 retweets…and the first slice of cake.” The fan ended up receiving 132k retweets and a visit from David Harbour! Harbour obtained his ordained minister license for the wedding, performed at her wedding ceremony, and he even dressed up as Sheriff Hopper!

Hey internet. I know it’s been awhile. I retreated. Needed some space. You probably get it. But I’ve been thinking about ya in the interim. And all your retweets. And so me and some fun folks in Springfield, Illinois made good on our promise we made all those months ago. pic.twitter.com/fZK8zNMQSi

"Stranger Things" was actually not Sadie Sink’s acting debut. Prior to the Netflix show, Sadie was a Broadway Baby! She starred as Annie in Annie: The Musical on Broadway and described theater as something she wanted to continue; however, she ended up transitioning to on-screen roles. Aren’t we glad she made that decision?!

Just like his co-star Sadie, Gaten Matarazzo also made his debut on Broadway. He has appeared in numerous Broadway shows, such as Les Misérables and Priscilla: Queen of the Desert. Gaten recently announced that he will join the Broadway cast of Dear Evan Hansen and will play Jared Kleinman.

Aside from his killer style, Caleb McLaughlin is also a trained dancer! He studied dance at The Happy Feet Dance School in Carmel, New York, which is actually his hometown. Caleb ended up attending The Harlem School of the Arts. Just like Gaten and Sadie, Caleb was also a Broadway kid. He starred as Young Simba in The Lion King from 2012 to 2014. The three actors already knew each other prior to filming "Stranger Things"!

Finn Wolfhard received his first acting credit from an ad off Craigslist.Finn was fortunate enough to gain success a few years later, but we wouldn't recommend this method for obtaining fame.

Steve Harrington is a fan favorite character on "Stranger Things", but Joe Keery is even better. Joe is in a band called Post Animals, for which he is the lead singer and guitarist. He has described his band as a “psychedelic rock & roll band”, and they have already made their touring debut. Joe hopes that Post Animals will have big success in the near future. He spoke toWomen’s Wear Daily saying, “I’ve been doing music and acting since I was pretty little. Just for fun. Being able to pursue both professionally is the greatest thing in the world. I feel pretty blessed.”

Did you know Winona Ryder isn’t her real name? She was born with the name Winona Laura Horowitz. She came up with Ryder because she was asked how she would like her name to appear in movie credits, and a song by Mitch Ryder was playing in the background.

Noah Schnapp made his film debut in Steven Spielberg’s Bridge of Spies, which co-starred Tom Hanks. For his second movie, The Peanuts Movie, he was the voiceover actor for none other than Charlie Brown. Not too shabby for a career start! Schnapp announced that he will attending the University of Pennsylvania in the Fall with a major in Business.

Remember when we said that Millie Bobby Brown learned her American accent by watching "Hannah Montana"? Little did she know she was watching her future co-star on the screen. Natalia Dyer made her film debut in Hannah Montana:The Movie as Clarissa Granger in 2009.

In 2019, Maya Hawke -- who is the daughter of Oscar-nominated actors Ethan Hawke and Uma Thurman -- released her debut singles titled "To Love a Boy" and "Stay Open". A year later, she dropped her album, Blush. Hawke is currently going on tour with singer Faye Webster as her opener.

All episodes of "Stranger Things" Season 4 are now streaming on Netflix!