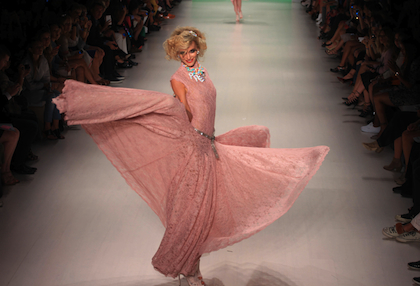 Think you know all about fashion? Think again as I rock your mind with 15 amazing facts about fashion that you didn’t know about! While many blogs, articles, and books have been written about this industry, many still probably aren't aware of these fashion tidbits!

1. Napoleon wasn’t just about war. He contributed to fashion in many ways too. The reason we have buttons on the sleeves of our jackets is because Napoleon got tired of his soldiers wiping their noses on their sleeves.

2. The first official Fashion Week started in 1943 in New York. Its main purpose was to distract the attention away from French fashion during World War II and kickstart the way for American designers.

3. There are 40 Fashion Weeks and 100 official events. The five most prominent Fashion Weeks are held in the fashion capitals of the world: Milan, New York, Berlin, London, and Paris. New York starts off the international circuit with its Mercedes Benz Fashion Week.

4. To be a Haute Couture designer, one must get approved by the Chamber of Syndicale, the governing body of fashion in Paris. How serious is the approval? Well, only 14 fashion houses have been approved out of the vast amount of designers we consider haute couture. Some of the non-approved applicants are great designers, such as Giorgio Armani.

5. There are over 100 fashion blogs with United States IP addresses, and that does not include sites that are sometimes used as fashion blogs, such as Pinterest or Tumblr.

6. Surprising as it may seem, there actually are more men at the executive level than woman when it comes to the fashion industry. Most of the CEOs and presidents of big fashion houses are men, not woman. Charles Townsend is one of those men, owning Allure, Lucky, Vanity Fair, WWD, and Vogue. Millard Drexler, another example, is the CEO of J. Crew, though many people mistakenly consider Jenna Lyons as the president.

7. Continuing on with men who run the industry, Valentino Garavani, Italian fashion designer, made red dresses just as famous as Coco Chanel’s Little Black Dress. His red dress has gained so much popularity that it has earned the nickname "Valentino Red".

8. A fun denim fact: Cotton fabric was used for clothing for over 7,000 years. Just one bale of cotton could make 215 pairs of jeans.

9. Sneakers came to us thanks to Keds, the first company to create this type of shoe, in 1917. Converse produced their first pair of sneakers later that year.

10. Marc Jacobs, strange as it seems, is the Creative Director of Louis Vuitton, a position he has had for 18 years. Bonus fact: He has tons of tattoos!

11. The first pair of Doc Martens were created from old tires.

12. The skirt is the second-oldest garment, with only loin cloths predating it. Oh, and up until the 1600-1700s, men and women both wore them.

13. In the 1500s, fashion designers showed off their clothing by putting it on miniature dolls. There were no such thing as models until 1853.

14. The first fake eyelashes were invented by Hollywood silent film producer D.W. Griffith, who wanted to enhance his actress’s eyelids. They were made out of real hair.

15. All women should be thanking Mary Phelps, a New York socialite, for creating the modern bra. The ones she made and patented in 1914 were very unlike the ones we wear today, though. Hers were made of handkerchiefs.