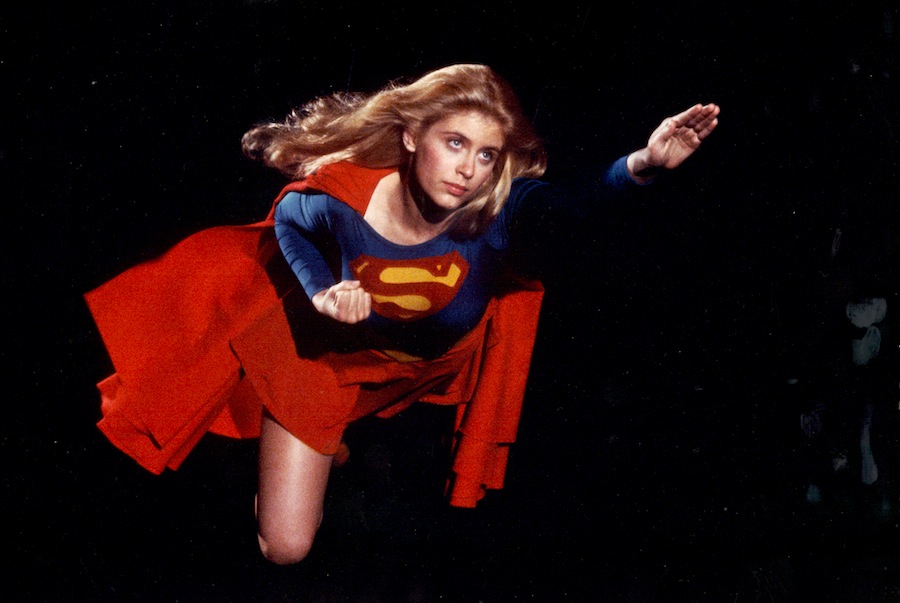 It looks like the next superhero to make the jump from the glossy pages of DC comics to the big screen will be Kara Zor-El, aka Supergirl. Warner Bros. has announced that there are no Superman films in development at the moment and the focus is being shifted toward the Man of Steel’s cousin.

Kara Zor-El -- or Linda Danvers, as she’s referred to while not fighting crime -- was portrayed on the silver screen back in 1984 with Helen Slater starring as the titular character. Supergirl has also found herself a successful TV series on The CW that is part of the ever-popular "Arrowverse" with actress Melissa Benoist in the starring role. All this, along with the success and following that Gal Gadot’s Wonder Woman and Margot Robbie’s Harley Quinn have received, means it is time for the Female of Steel to make her triumphant return.

No director has been attached to the film yet, but Warner Bros. has hired Oren Uziel (22 Jump Street, The Cloverfield Paradox,Sonic The Hedgehog) to pen the script. So with the film in the early stages of development, it is a perfect time to speculate who should suit up as the famed DC hero. Should the studio go a traditional route, or should they go in an all new direction with the character? Whichever way they decide to do it, I’ve developed 10 solid choices to play the titular role and turn Supergirl into DC’s next big hit film!

Fans who know about Supergirl know that a young Kara would have to display sweetness and naiveté while being able to turn into a dominant superheroine at the drop of a hat. Actress Lily James's filmography not only suggests she could play the role, it pretty much screams "Make Her a Superhero!!!!" The lovely leading lady has credits in almost every genre, from Disney princess to a badass heroine who knows how to save the day. Her major credits include Pride and Prejudice and Zombies, Wrath of the Titans, "Downton Abbey", Cinderella, Darkest Hour, and Baby Driver. Her talents can be seen as she headlines in Netflix’s The Guernsey Literary Potato Peel Pie Society, now available on the streaming service. Armed with range, experience, and a heart of gold, James is one of the top choices to become the next Supergirl.

The Irish actress proved she was among the ranks of the respected dramatic actors with her solid performance in Greta Gerwig's indie gem Lady Bird. That part earned her a nomination for Best Actress at the Academy Awards and a win at the Golden Globes. So if the studio wants to continue to bring seasoned players into their cinematic universe, Ronan would be a welcomed addition to a roster that includes Margot Robbie and Gal Gadot. Ronan has had an impressive career, from The Lovely Bones to Brooklyn, and has some experience in an action setting from her role in the film Hannah. Saoirse Ronan is already a superwoman in real life, so the transition to Supergirl in the DC Universe should be a breeze for the acclaimed actress.

Diversity is the name of the game today in Hollywood, and since we're technically dealing with extraterrestrial beings, that leaves the door wide open to a variety of casting options. Thus it is crucial to have actress Adriana Arjona on the short list to play the Last Daughter of Krypton. After having roles in HBO’s "True Detective" and Netflix's “Narcos", Arjona then starred in the short-lived "Emerald City" on NBC. Her recent cinematic endeavors can be seen in Pacific Rim Uprising and Life of The Party, where she showed she can run with the big dogs in both action-packed films and hilarious comedies. She’ll continue her rise to the top with Netflix’s films Triple Frontier and 6 Underground. If the studio is looking for someone who is a calm, intelligent, and sincere operator no matter how crazy the scene ends up being, look no further then the beautiful and talented Arjona to make us believe a woman can fly.

One of the biggest travesties in Hollywood today is that "Big Little Lies" star Zoe Kravitz hasn’t already been made a superhero or headlined a major tentpole film. Kravitz has a powerful presence on screen, steals the scene with every role she takes, and is more than ready to helm her own franchise. She has survived the Fury Road with Mad Max, fought back oppression in the Divergent films, showcased her drama muscles in Yelling to the Sky, and already has some comic book movie experience with her run in X-Men: First Class. She is also the stepdaughter of Aquaman Jason Mamoa, so she already has some DC cred in the family. Recently, she starred in the sci-fi action flick Kin, which is now in theaters and continues to add to the many reasons she is more than perfect for this role. If you were putting out a Want Ad for someone to play a caped hero who is the cousin to the Man of Steel to lead a franchise that desperately needs marks in the win column, Kravitz is the ideal choice to reintroduce Supergirl to the world.

To truly find the right performer to give the famed DC hero the right amount of wit and class presumably needed to bring a Kara Zor-El's story to life, one must consider all avenues of approach. And with that being said, I absolutely love Ally Maki and think she is poised for big screen success in the near future. This hidden gem is quickly becoming a breakout star. Fans will recognize her as a regular on the hit TBS comedy "Wrecked" where she pulls in a ton of laughs. But what makes her a standout for the role in question is her becoming a recent addition to Marvel’s "Cloak and Dagger" series, proving she has the chops to get the job done in the superhero genre. Maki, who has been acting since she was 14, is a bright, funny up-and-comer who could flawlessly portray the infamous Supergirl.

This talented actress shocked audiences with her dark and mysterious role in the addictive Gillian Flynn adapted series "Sharp Objects" opposite Amy Adams, who plays Lois Lane in the DC films. So those two already have great chemistry should their paths ever cross. Playing both the innocent daughter and the rebellious bad girl while hinting at some mysterious secrets, she not only proves she has the skills to play Kara, but if Warner Bros. has its heart set on it being a teen superheroine picture, Scanlen would be the perfect breakout star for Supergirl. And if anyone wants to question her ability to make the jump to the big screen, her next gig should ease that nonsense, as her follow-up from the HBO series will be Academy Award-nominated director Greta Gerwig’s Little Women remake. Scanlan is one of today's top rising stars and she shows little signs of slowing down. If the studio wants to get Scanlen, they better do it faster than a speeding bullet before she rises so high not even Superman could catch her.

If the filmmakers want to go a bit darker with their version of Supergirl than previous iterations, the prime candidate to pull that off is none other than The Nice Guys actress Margaret Qualley. The industry has yet to fully utilize the powerful acting chops Qualley brings to the table, and she has not been pushed as far as she can definitely go in a performance. This could just be the role that turns her from a familiar face to a household name. She definitely showcased the ability to pull off the tragic hero vibe with her dark roles in Netflix’s Death Note and HBO’s "The Leftovers”. The actress is more than qualified to play any superhero, especially one experiencing the fear and isolation Kara would experience on Earth. If the studio wants to go in the direction of a psychological thriller version with some deeper levels of inner conflicts, Qualley is the perfect fit to rock the S on her chest.

Anyone who has ever watched Netflix’s "Dear White People" knows that actress Logan Browning is a force to be reckoned with on screen. She has displayed a flawless execution of passion, confidence, and authority in the critically-acclaimed series. Browning has also had a brief brush with comic book superheroism in the short-lived "Powers" series on the PlayStation Network. So she already has some street cred when it comes to the superhero game. Logan could easily convey the heart and passion Supergirl is known for while striking fear into the eyes of any villain she encounters. Browning is as beautiful as she is talented and would definitely do Kara Zor-El justice if she should ever get the call to don the famed red and blue suit.

The studio may opt to go for a fun and quirky Supergirl, similar to the successful series on The CW. While providing a lovable protagonist, the role in question will also need someone who can take a hit, so to speak, as she will presumably be taking on some larger-than-life foes. This is where actress Jessica Rothe establishes her case for playing the alien superheroine. Rothe has definitely proven she can take some hits from how many times audiences saw her get killed in Blumhouse’s Happy Death Day. The actress showed she can handle horror, comedy, drama, and action with having gone toe-to-toe with a masked evildoer in a humor-filled Groundhog Day scary movie. Roth definitely has the character's traditional look and there is no question she definitely needs to be in the discussion to play the Girl of Steel.

Here's an actress who is proving she has serious star power, and despite her being at the bottom of the list, in my opinion, she is the heavy favorite to land the role of Supergirl. Her attitude and confidence would translate well in bringing Kara Zor-El back to theaters in this new universe. She has the look, skill, style, and everything about her screams Super Badass That Kicks Butt And Takes Names. "Terra Nova" made her presence known, and her role as Kimberly in the Power Rangers film solidified her on-screen dominance. She is quickly becoming one of the most sought-out actors in the game, as she will be playing Princess Jasmine in the live action Aladdin film and will become one of Charlie’s Angels in the highly-anticipated reboot. Scott is definitely in demand, and becoming Supergirl would make her one of the biggest franchise players, raising her stardom status to a whole other level. Simply put, Naomi Scott is a solid choice to suit up as Supergirl in the world of DC Films.

Who would YOU like to see suit up as Supergirl?