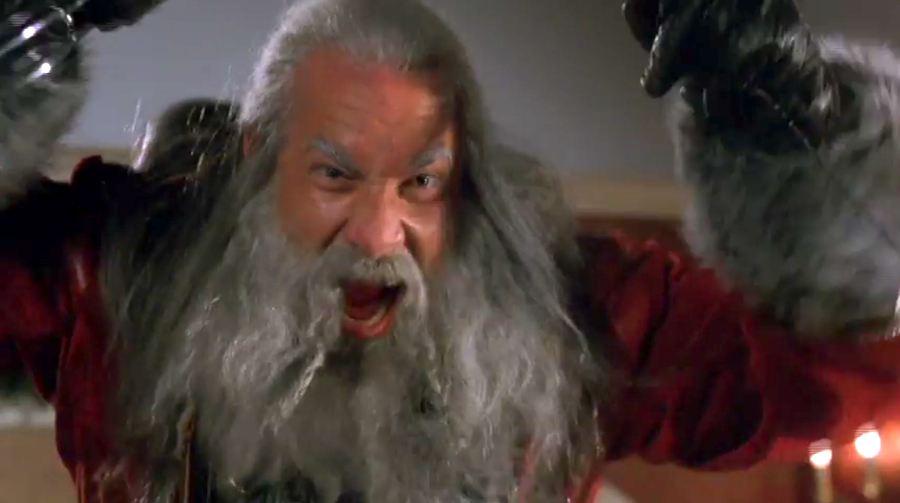 Released in 2005, Santa’s Slay is a bizarre cross between a Christmas film and a horror film that stars former wrestler Bill Goldberg as Santa Claus, known for his signature moves The Spear & Jackhammer!

The film starts off pleasantly enough: as an insufferable family consisting of James Caan, Chris Kattan,Fran Drescher, and Rebecca Gayheart bicker over Christmas dinner, Santa tears down their chimney and murders them all. This murder scene is so completely absurd as there appears to be no point to it other than to show that Santa doesn’t put with no naughty folk and to reflect on the irony that a great deal of the actors who were killed in the film (including Santa himself) are actually Jewish in real life? Or at least this is how I interpreted it. Either way, this opening scene is hysterical, and from the first five minutes, the film slips into complete insanity.

Santa descends on Hell Township with his “hell-deer” (no really, that’s what they’re called) and proceeds to go on a killing rampage for no apparent reason. He particularly likes killing people with Christmas-themed objects, including a candy cane and a wreath, which I found even more hilarious. My personal favorite is when he tears up a strip club on Christmas Eve. (He greets the strippers by yelling “Hoes, hoes, hoes!” Naturally.)  I suppose that this is because the strippers are “naughty”, or because the club is run by a crooked minister... either way, he decides to kill everyone. How merry! I do enjoy Santa’s tidiness: he wipes down the stripper pole before using it as a weapon. One must be clean while murdering!

Meanwhile, on the other side of Hell Township, Nicholas Yule's son (Douglas Smith) is forced to spend time with his grandfather (who should be in a home), played with delightful fun by Robert Culp. Crazy Grandpa forces Nick to spend Christmas Eve with him in an old 1950s nuclear fallout shelter. Grandpa regails Nick with the “true” story of Santa from The Book of Klaus, and this is the most convoluted-yet-best story of Santa ever: Santa is literally the spawn of Satan, and on Christmas in 1005 AD, an angel beat Santa in a game of curling (eh?) and forced Santa to be the jolly deliverer of presents that we all know and love for 1,000 years. But -- oh-ho! It’s 2005, which means the curse is up, and bad boy Santa is back to get some revenge!

The rest of the film follows Santa as he attempts to slay Nick and his girlfriend, Mac, played by “Once Upon a Time” star Emilie de Ravin, in one of her earliest roles. The film starts to become less fun as it goes on -- the more of a drawn-out chase sequence it turns into, the less we get to see of Santa going on a murderous rampage and coming up with ridiculous one-liners. Even though Santa’s Slay is arguably the better slasher holiday flick than my favorite, Silent Night, Deadly Night 2, I personally enjoy the camp of the latter more, plus the fact thatSilent Night, Deadly Night 2 actually seems to attempt to take itself seriously at parts, whereas Santa’s Slay is pure absurdity. Having said that, the film is definitely worth watching just to see Goldberg play Santa. He has so much fun with the part that you can’t help but have fun with him. I have never seen Goldberg wrastle, but after watching Santa’s Slay, I find myself wanting to watch a few of his past matches.

FUN FACT:Santa's Slay was co-produced by Brett Ratner. WHAT!?