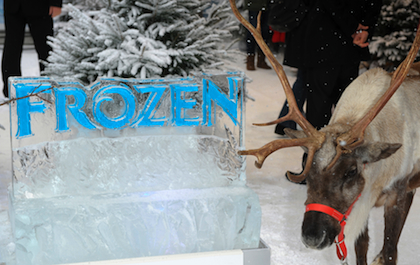 Probably one of the most progressive Disney movies ever, at least in my opinion, is their latest animated feature, Frozen.

The film was released in late-November of last year, and since then, it has been winning over the hearts of children, teens, and adults of all ages. The movie is based on the classic Hans Christian Andersen fairy tale, The Snow Queen, and features the voices of Idina Menzel (Wicked, Rent), Kristen Bell, ("Veronica Mars", Forgetting Sarah Marshall), Jonathan Groff ("Looking", Spring Awakening), and Josh Gad (The Book of Mormon, "1600 Penn").

The film follows the story of a young princess and her journey to find her sister, the Queen of Arendelle, venturing into the mountains to protect the kingdom from her own icy powers. She finds a companion in a mountain man and his reindeer, as well as a magical snowman named Olaf from her and her sister’s childhood. There are also some trolls, a jerk named Hans, and some catchy musical numbers. All in all, the movie was great!

But there are other things to take away from the film. Frozen offers a few valuable life lessons for the Generation-Y girl of the 21st century. Here they are for you wrapped in cute, little, inspirational quotes!

**WARNING** THERE ARE SPOILERS IN THE FOLLOWING. DO NOT READ IF YOU HAVEN’T SEEN FROZEN.

This is simple and true. They even point it out in the movie when Anna is in the sleigh with Kristoff and she is telling him about Hans. Hans, as you all know, ends up being a dirty, rotten, power-hungry, stupid manipulator and leaves Anna for dead in the movie. So watch out! Sometimes, strangers don’t always seem as nice as they appear.

This would have been great advice for Elsa before she ended up alienating her sister and freezing the entire kingdom. She was too scared of hurting someone and asking for help, when all she needed was her sister’s support to really control her powers. Sometimes you have to learn to ask others for help. You can’t always do it on your own. Take this in stride.

3. “Look around you; sometimes everything you need is right next to you.”

Anna had Kristoff right by her side throughout almost the whole movie and she didn’t realize that he was the love she had always been yearning for. Some times you don’t need to look so hard because every thing you needed is sitting next to you.

This is the advice that Olaf gives to Anna when he is helping to teach her how to skate at the end of the film. Not only is this useful advice for ice skating but also in life. You just have to glide along, and when you’re ready, pivot. Take a risk and turn, change direction; life isn’t always going to be a steady ride, so be ready and go with the flow.

5. “Sometimes you have to make sacrifices.”

Much like Elsa, you have to make some sacrifices in life. She gave up using her powers to keep her sister and family safe. Sometimes we all must make sacrifices for the better, whether its giving up sweets for a diet or giving up buying that cute pair of shoes to save up for a car, some sacrifices need to be made.

I cannot emphasize this one enough. In the end, Anna needed an act of true love to save herself. The whole time we thought it would be Kristoff or even Hans who would kiss her and save her, but in the end, she saved HERSELF... By saving her sister! That act of true love benefitted both of them. For us girls, it’s a nice reminder every now and then that YOU DON’T NEED A BOY TO MAKE YOU HAPPY. Or, in this case, you don’t need a boy to save you. You are capable of doing it on YOUR own.

This is great advice for everyone. Sometimes all the bad stuff, like stress, anger, frustration, and all those other things, can bring you down when they shouldn’t! Sometimes you just need to let it go.