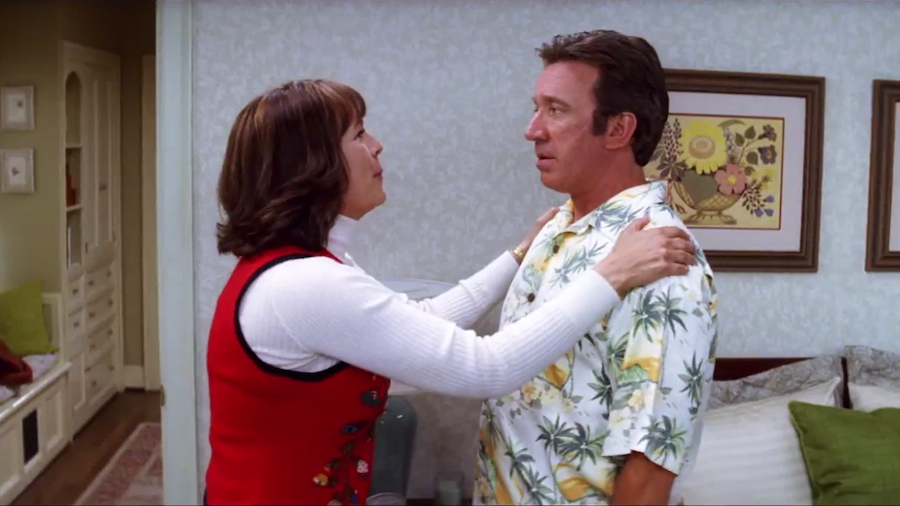 This holiday movie guilty pleasure is a film written by one of America’s premiere holiday storytellers: John Grisham.

Back in 2001, Grisham decided to take a break from writing dramatic novels about lawyers frantically trying to save someone so that he could write Skipping Christmas, a story circulating around the Kranks, a husband and wife who decide to skip Christmas because they are so cranky. (Get it? And that’s how Grisham taught us what irony is, kids.) Skipping Christmas caught the eye of director Christopher Columbus, the man who brought us holiday classic Home Alone. He bought the rights, and thus the film Christmas with the Kranks was born.

The film opens with Luther (Tim Allen) and Nora (Jamie Lee Curtis) Krank, who send their daughter off to Peru. At first, I wasn’t sure if the film was a light-hearted Christmas romp or a couples therapy video shown to train marriage counselors. Luther and Nora's marriage has the chemistry of a cardboard box and a broken down couch. In the first scene, Nora sends Luther out into the pouring rain to buy her some white chocolate. She snipes at her husband for not “asking the butcher where the white chocolate is”, and her husband screams back that he is tired of getting wet. That seems to be their relationship throughout the entire film. I couldn’t tell if one was bipolar, or if one was just manic depressive, but these two were a Freudian dream team.

Luther decides to mix it up by taking his wife on a Caribbean cruise and to skip Christmas altogether, since his daughter isn’t around and he wants to have sex with his wife on nights other than Saturday. His wife unwittingly goes along with this idea, and we learn where Luther and his wife get their crazy from -- it’s their completely unhinged neighbors, led by a particularly prosperous Dan Aykroyd, who treats their boycott of Christmas as though they have slaughtered a bus full of children. Aykroyd, dressed in what appears to be a shag carpet, is ready to string up Luther and feather and tar him when he refuses to buy a Christmas tree from the Boy Scouts. What dirt do the Boy Scouts have on Luther? (Or what dirt does he have on them?) That’s just the first of the many infractions that Luther and Nora commit -- all of the neighbors eventually rally against them, chanting “Free Frosty!” like some sort of French Revolution mob. It makes absolutely no sense whatsoever, and it’s like watching a rejected episode of “The Twilight Zone”. It’s fascinating and disturbing how obsessed with Christmas these people are. I can’t tell if they’re all insane, on drugs, or just really lonely, but the film goes into a full psychiatric study, and it’s great.

The strangest scene by far is when Luther decides that he and his wife must prepare for their trip by visiting an Oompa Loompa who runs a tanning salon and doesn’t seem to find it strange that a priest wanders into her business to ogle Jamie Lee Curtis in a bikini, or that Tim Allen parades out like an orange Michelin Man in a speedo. Of course, it could be argued that the strangest scene is when Allen gets botox and wanders in for Irish tacos (because apparently that exists?) and resembles the Heat Miser, and he begins to act like it -- he literally is able to contort his muscles into that of a claymation figure. There is never any explanation as to why these scenes are in the film, other than for us to laugh at older people tanning I guess?

The rest of the film changes direction from a psychological study to a haphazard Christmas romp as the Kranks' daughter decides to come home for Christmas on Christmas Eve, because she secretly wants to destroy her parents' souls. The pair frantically rushes around town, during which Nora fights with an old woman for canned ham and Luther decapitates Frosty the Snowman and attempts to steal a Christmas tree. The neighbors decide that, after seeing this, maybe they helped turn him into the Heat Miser and that they could help by putting up a wreath or two.

Christmas with the Kranks is by far one of the strangest Christmas films I have ever seen, as it doesn’t really feel like a Christmas film. It’s part-couples therapy study, part-mob mentality, part-horror, and there are some random Christmas carols thrown in there for good measure. It’s so chaotic that you can’t help but watch it, wondering when and where the Kranks will finally go postal. And let’s face it, any film that features Tim Allen with a botoxed face that resembles the Heat Miser is worth watching!