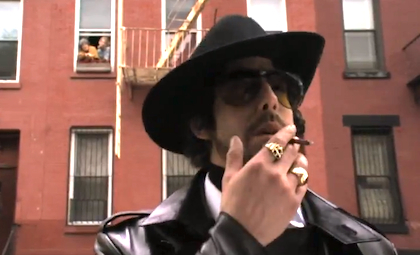 A Happy belated Hanukkah to all of you! I originally reviewed Adam Sandler’s Eight Crazy Nights for the Festival of Lights, but decided against it in favor of this parody of blaxploitation films, The Hebrew Hammer. Starring Adam Goldberg as the titular Hebrew Hammer (AKA Mordechai Jefferson Carver -- that’s a mouthful, oy!), the movie follows Morty on his quest to save Hanukkah. The film’s entire premise is basically summed up by the opening dedication: “To all of the brothers and sisters who have had enough of the gentile.” If this line offends you in any way, then do not watch this film. If you find this line hysterically funny and have always wanted to see a Hassidic version of Shaft, then, by all means, watch The Hebrew Hammer immediately.

The film’s opening sequence shows us wee Morty, who is picked on by the Christian children in his class for being Jewish. As they taunt him, their teacher reminds them all to be tolerant, and that they should all wish Morty as a Happy Hanukkah -- although she mispronounces Hanukkah so badly I thought that perhaps she said “horse’s ass”, but maybe that was the point. I personally felt for poor Morty. My father is Muslim and my mother is Catholic, so we had a quirky version of Christmas along with my dad’s grumblings during Ramadan about being hungry, which didn’t always mesh too well. I was also often tormented by some of my Christian classmates, so right off the bat, Morty is a rather relatable character to me.

Some years later, Morty grows up to become The Hebrew Hammer, "the baddest heeb this side of Tel Aviv". His outfit consists of a long, black leather coat, cowboy boots complete with the Star of David spurs, and a fedora with a luxurious feather poking out the top of it. I personally loved his outfit, and there is a part of me that really wants to wear it to my Jewish friend’s wedding. I also suspect that if RuPaul ever converted to Judaism and wanted to become a detective-slash-pimp, he would don this ensemble. Morty is the most popular cat on the streets of Brooklyn (come on… where else did you expect him to be from?), battling off meddling babushkas who are trying to marry him to one of their daughters. He is the most sought-after detective/possible Jewish superhero, and, frankly, I’m surprised that he was the first detective/possible Jewish superhero. (I think that Spider-Man may be Jewish… he is the only superhero whom I think might be. Anyone else get that vibe?)

Meanwhile, up in the North Pole, Santa has taken over the business from his father, St. Nick the Nasty, whom he said was dead but I’m pretty sure probably retired to become a porn star. He is friends with Morty, and favors tolerance of all holidays. Santa's son, played by Andy Dick, doesn’t like this idea and kills his jolly ol' dad using his reindeer and machetes, and decides to rid the world of Hanukkah altogether. So, naturally, the Jewish Justice League, who does not have anyone sitting in the Jewish Athlete chair but seems to have more than one person sitting in the Film Production chair, calls upon The Hebrew Hammer to save Hanukkah. Chief Bloomenbergansteinthal (Peter Coyote) is slightly wary of this plan, but his daughter Esther, played by the always wonderful Judy Greer, convinces him otherwise. Before meeting the Jewish Justice League in person, Morty must undergo a series of tests to ensure that he is “Jewish” enough:

From this point on, the film becomes completely ridiculous. I found that the more over-the-top it became, the funnier it got. I was particularly intrigued by Morty’s overbearing-but-endearing caricature of a Jewish mother, played by Nora Dunn, who pimps her son out, badgers him to eat more, and constantly criticizes him. And in order to help save Hanukkah, Morty joins forces with the Kwanzaa Liberation Front, led by Mario Van Pebbles, who seems to be a clone from an actual blaxplotiation film. Evil Santa’s sidekick, Tiny Tim (Sean Whalen), attempts to turn Jewish children away from their faith by sneaking them bootleg copies of It’s A Wonderful Life. One child becomes so struck by the film that he stands in the middle of the street, chanting “Every time a bell rings, an angel gets its wings…” I loved that Morty had a stock collection of films with Jewish protagonists to give the child (i.e.: Yentil). The film is completely self-aware of how absurd it is, and is consistently pushing the limits. But instead of ending up as a disaster, the result is a strangely hilarious success. Mazel Tov to the writers -- they have created a flick that runs along the vein of other great self-aware comedies, such as Airplane! and Black Dynamite.

By far, the scene that you absolutely must watch from the film is the one in which The Hebrew Hammer takes down a group of skinheads. Words cannot describe, so just watch for yourselves (some NSFW language, so click here to check it out).