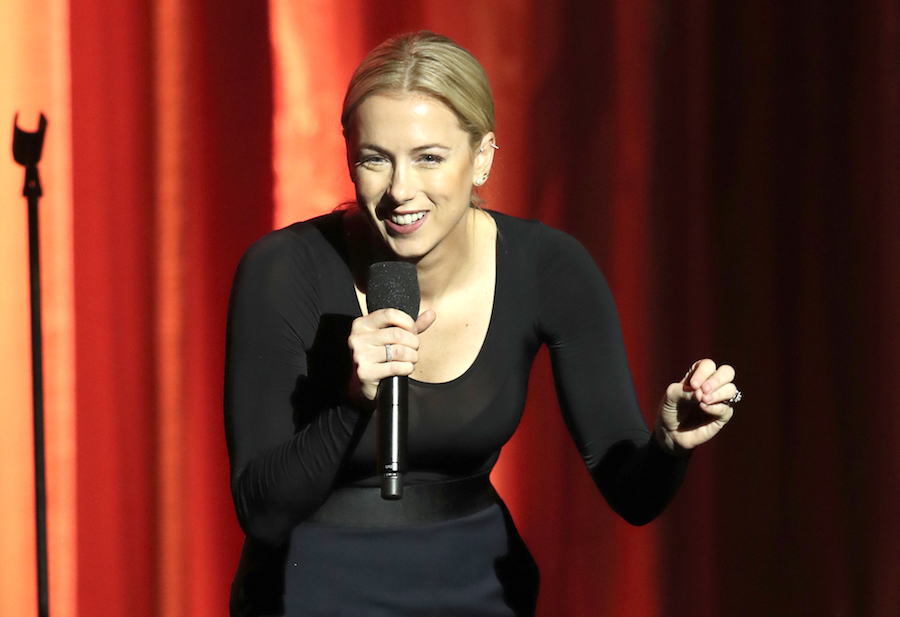 I first discovered Iliza Shlesinger in 2013, when I was 16 years old and "War Paint" burst onto the Netflix scene. Before that, I hadn’t watched a ton of stand-up specials, and Iliza’s performance absolutely blew my mind. She was so original, so candid, so real. And the subject matter she tackled in it – she basically took the audience through a day-in-the-life of being a woman in her 30s and all that womanhood entails – was executed in a way that I had never seen before and have been fortunate enough to witness in four specials since. If you aren’t familiar with her impressive body of work, you should know that she does these impressions of how girls talk to each other and about certain universal circumstances, and it’s effing hilarious. Take a look at the clip below to see what I'm talking about.

She’s such a smart person, and that intelligence complements her comedy perfectly. Not only is her comedy relentlessly relatable, but her use of language has me on my phone’s dictionary app from the beginning of the act to the end. But it’s not just her stand-up that makes her one of the most fun comics of our day; her podcast "Ask Iliza Anything", which she often co-hosts with her assistant Emily Higgins, allows her to put her wit to the test in the form of solicited advice to complete strangers. Emily and Iliza are such a funny duo, and the advice they dish out is genuinely useful – I don’t know how I would know the best flavors of Sour Patch Kids otherwise. Again, Iliza’s ability to spice up the mundanities of life in such a uniquely cheeky way is something I can listen to all day, every day.

If you’ve listened to the podcast as religiously as I have, you would know that Iliza isn’t afraid to talk about her personal life, which is another thing I love about the girl. She is the definition of "practice what you preach" – she encourages her listeners to share their personal lives with her, and she shares her personal life with us in a way that I find quite uplifting. She always reminds her listeners that they’re never alone in whatever they may be going through, be it relationship issues, family struggles, problems at work or school, or whatever else it may be. One of the subjects that has come up several times is Iliza’s psycho ex-boyfriend. But, of course, Iliza being the super talented entertainer that she is, didn’t just talk about it on her podcast – she wrote a movie about it! Good on Paper was released on Netflix on June 23, and it had all the makings of a great Iliza Shlesinger project – it was funny, it was honest, it was a little dark, and, as always, Iliza was able to beautifully verbalize what we all were thinking throughout the film. Also, there was a great little revenge element to it that, without spoiling too much, is I’m sure cathartic for those who have also had to contend with crazy exes in their lives.

If I haven’t already made this obvious, I’m a huge fan of this woman. I really appreciate how she is able to relate to her fans in a few different ways – through her seemingly effortless witticisms, her highly intellectual quips, and through her more vulnerable, heartfelt moments of candor. She is also all over Netflix, having released more on there than just the specials and films mentioned above. If you’re looking for something a little more action-packed, Spenser Confidential is the flick for you; if you’re looking for all of Iliza’s kooky characters in one laugh-out-loud package, then definitely check out "The Iliza Shlesinger Sketch Show". And that’s not even all of it – the Iliza cup never runs empty! I love that since that first special in 2013, more and more people have gotten to know her through her and her husband’s Instagram presence, her audio-only ventures, all of her stream-able content, and more! Heck, the woman won "Last Comic Standing" in 2008, so if you have a free weekend, I highly recommend scouting that out too. And, of course, she has been in the Young Hollywood Studio – honestly what more could you ask for??

We will always root for Iliza, and we're so happy to see her succeeding as an entertainer, writer, and producer in multiple different facets. This may not make sense to some of you, but it should – she’s our top of the cob this week, and every week!