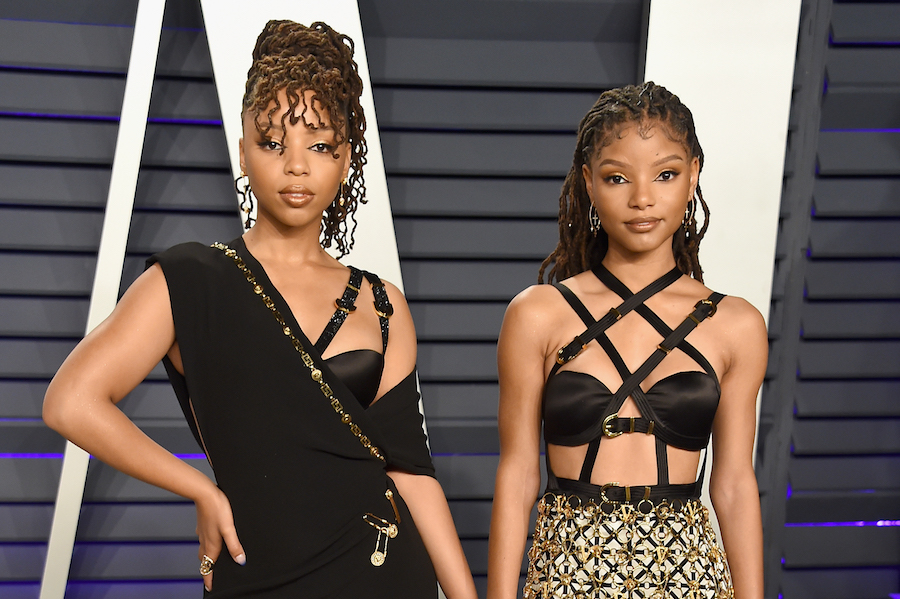 Starring in Freeform’s “Grown-ish”, touring withBeyoncé and Jay-Z, and receiving a GRAMMY nomination for their debut album The Kids Are Alright are just a few of the many things Chloe x Halle have accomplished in the past couple of years. Their long-awaited sophomore album Ungodly Hour dropped on earlier this month -- Originally scheduled to release a week earlier, the duo made the decision to delay the release to focus on amplifying and supporting the voices of the Black Lives Matter movement.

We got a taste of what was to come when Chloe x Halle released the upbeat first single “Catch Up” featuring Swae Lee and Mike WiLL Made-It. The Bailey sisters showed off their power when they released the second single “Do It” and it instantly became a hit. Each track unfolds a story of life and relationships.

Ungodly Hour demonstrates the duo’s growth and maturity. The R&B album is definitely one of the best albums released this year. Chloe and Halle Bailey have been involved in their music since the beginning, having production and songwriting credits in addition to performing. We’re ready to take you through Chloe x Halle’s album in this edition of Track by Track!

Chloe x Halle guide us into the world of Ungodly Hour through the harmony and incorporation of angelic vocals. The transition from this track into "Forgive Me" is absolutely phenomenal. “Don’t ask for permission, ask for forgiveness” is the message they convey in this introduction.

The third single, timed at 2:37, leaves the listener craving for more. I absolutely love the production of this track, it is breathtaking. During my first listen of the album, I instantly became captivated. Chloe and Halle are unapologetic and showing their worth. They are done will all the BS and moving on as the powerful and confident women they are. The all-black attire, shovels, and facial expressions guarantee that they are way over the relationship.

“Do it for the girls, all around the world,” Chloe x Halle preach through this new female empowerment track. There is this sense of motivation in the track, from feeling low to getting near the goal you are trying to meet. “Baby Girl” is there to remind you that you were once a dreamer when younger -- use that as encouragement and become the person you sought to be.

Favorite lyrics: “Don't you let the world take back / All the love that you gave out...”

From having a viral dance on TikTok to performing live from their iconic tennis court on the "TODAY" show, “Do It” appears to be a hit for the summer. The Bailey sisters are here to show you how they do it in ths feel-good and catchy track. Once you listen to the song, it gets stuck in your head. You may find yourself going “Ooh, ooh that's just what I do, do, do.”

The music video, being the first from the era, highlights the maturity of the album. There is a shift from what we saw during their debut album era. In fact, the choreography featured in the video became viral on TikTok when the duo started the #DOITchallenge.

Favorite lyrics: “Tiptoe 'round a hater, I'm light on my feet / That's how you do it, keep stuntin' on your enemies / Good vibes only...”

Being one of the three explicit tracks on the album, “Tipsy” brings in the fun with a dark twist. The lyrical story is genius and the production by Chloe ties it all perfectly together. It is a warning to not mess up a relationship. Being tipsy in love is a perfect metaphor to express being in love and not wanting it to be ruined. A visual for this track would for sure tie in with what we saw in the “Forgive Me” music video.

Favorite lyrics: “Better than those other guys who change up like the weather, yeah / It is such a shame that they went missing, they can't find 'em now...”

Chloe x Halle are tired of indecisiveness and define their self-worth in the album's title track. Produced in collaboration with the electronic duo Disclosure, the track fully establishes the album’s theme. There is no time for someone who is not prepared to commit in a relationship, so Chloe and Halle give them some distance and offer another opportunity when ready.

Favorite lyrics: “When you don't have to think about it / Love me at the ungodly hour...”

This song is directed to all those playboys. “Busy Boy” is the term they use to describe the guy that is constantly trying to talk to other girls while in a relationship. But, of course, they immediately shut them down. With an old record-sounding intro and transition into an upbeat tune, the track gains its recognition. You’ll most likely be singing along to the chorus by the end of the song.

“Catch Up” was marked as the first single off of Ungodly Hour. The pace of the track remains consistent, which makes it the perfect vibe. The track goes on about overhearing things about both parties involved in a relationship. The mix of Swae Lee and Chloe x Halle’s vocals on the chorus make the song.

As done on their debut album The Kids Are Alright, the Bailey sisters added an interlude into the new album. With heavenly harmonies and a soothing tune, Chloe and Halle express the feelings of being overwhelmed. Holding your breath or non-stop running are just a couple of the descriptions they provide for this feeling.

This track is probably my favorite off the album. “Lonely” shows that being alone may give off that feeling of loneliness because we don’t count ourselves as company. Rather than waiting for someone or seeking a phone notification, encourage yourself to do what you enjoy and push away that feeling. The duo’s mesmerizing vocals layered with the beat make it the perfect track.

Favorite lyrics: “I know you wish you had somebody to hold (Oh, oh) / It don't have to be lonely being alone...”

Chloe x Halle express the emotions arisen when an ex re-enters your life while you’re in a relationship. The temptation is confronted as they state “you already hadâ€…your chance, so I need you toâ€…stop sayin' the things you say.” This track instantly gives old-school vibes. I’d honestly be upset if no one incorporated this song into a rom-com movie.

Favorite lyrics: “Don't make it harder on me / I told you not to love me / And now you're growing on me...”

Opening up the track, Halle begins posing the questions of what “the other woman” in the relationship may feel. Although, attempting to not interfere, they wish their love interest the best. Produced and written by Chloe and Halle, the track becomes one of the most notable.

Favorite lyrics: “I'll hold you close and pretend you're mine / I'll be the sun against your skin...”

The final track exclaims that you just got to live a little. The 21 and 20-year-old urge the enjoyment of your youth as a young adult. It is not the end of the world if you make any mistakes; you’ve got the “rest of your life” to figure it out. The upbeat tune marks the perfect ending for the album.

Favorite lyrics: “You ain't gotta let the world get to you / Why you lookin' in the mirror like that?”

The Bailey sisters left us stunned with the release of Ungodly Hour. As soon as concerts are back on schedule, I will for sure reserve tickets to see them perform this album. In the meantime, I’ll continue streaming and challenging myself to learn the viral “Do It” dance...