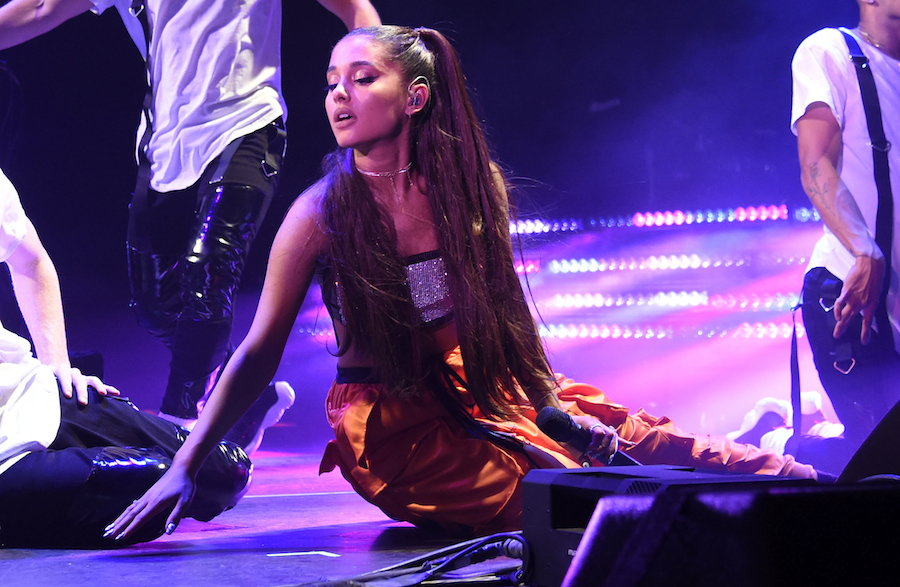 Whenever a highly-anticipated album is released, I always like to listen to each song in chronological order, giving myself the opportunity to detect any trends, storylines, or overall visions an artist may have had when structuring their album.

Last Friday, Ariana Grande’s sweetener came out and my first summation was that the album is structured like a musical. With a background in musical theater, it doesn’t surprise me that Ariana’s album plays out like one. There is the overture-like opening song, "raindrops (an angel cried)". There are ballads like "God is a woman" and duets like "borderline" featuring the one and only Missy Elliott. There are also short tunes that don’t even make three minutes, like "everytime" and the last-minute edition "pete davidson". Each song transitions fluidly into the next, carrying over a beat or theme that makes the album a story.

Something else I noticed about sweetener? Whether she directly intended to or not, Ariana certainly drew inspiration from other musical icons. Maybe it is my own personal detection method and the library of songs stored in my head, but many of the tracks on sweetener evoke sounds that are reminiscent of recognizable beats, singing styles, and genres. While the entire album itself is a masterpiece, I’m breaking down the 15-track album, giving my take on every single beautifully crafted song.

It’s 37 seconds of pure magic. The richness and quality of her voice is so true that it sounds like Ariana Grande is singing right in front of you. She’s setting the tone for the remainder of the female empowering album in mere seconds. Genius.

Who knew Ariana and Pharrell had such complimentary voices? Clearly Pharrell did, as he sings, “there is something between us.” Pharrell also served as a producer of sweetener, helping orchestrate and exercise the creative vision within Ariana. Featuring octave changes, harmonies, and voice echoing, this song is complex but sounds fun. It’s the perfect beat to listen to in the last weeks of Summer.

#Arianators worship their queen Ari, but they did not hold back when it came to expressing their dislike of this song. My guess for why? There is a lot less singing and much more talking done by Ariana on this song. It’s a little odd in my opinion -- it is the only track on the album that I think could have been left off, but that would mean no Nicki, and you know these two women had to have a collaboration together. I must say, I really like Nicki’s part. Other than that, I don’t feel bad pressing skip on this one.

"R.E.M."? More like R&B! This song, which Ariana has dubbed her favorite of the moment, pairs an uppity and breathy beat with slow and rhythmic vocals from Ariana. Her voice eventually catches up to the beat of the song, giving us quintessential Ariana vibes with riffs and prolonged notes. The song transports me into an older, simpler time, back to the '80s. I obviously was not alive during that time period, but the little "bum bum bums" Ariana sings in "R.E.M." reminds me of the '50s song "Mr. Sandman", made famous by The Chordettes. Give it a listen and see if you can hear the resemblance.

An absolute BOP. This song shows the supreme talent of Ariana Grande -- clever lyrics, absurd octave changes, and a catchy undertone that will transcend its time. Her fiancé Pete Davidson says this is his favorite song, and I might have to agree with him. I find myself (embarrassingly) singing along to this song, pretending I have the vocal abilities of Ari, because there is no other way to listen it. You just have to belt it out.

The title track is hard to classify. It has a similar opening to "raindrops (an angel cried)", but quickly transitions into a more poppy song that implies, well… a lot. "Sweetener" is certainly explicit, and uses what sounds like a xylophone to almost refocus the song towards the tune and away from the lyrics.

When the song first started, I was instantly confused. The opening beat reminded me of something that I couldn’t quite place. It finally hit me -- it sounds like the opening to a children’s song. But then I took it one step further. The majority of the song uses the same few notes, which makes me think of a kid putting together the melody of a song on their keyboard. Maybe they even have the synthesizer effect on too. The steady repetition of those simples notes reminded me of a metronome, which Ariana mirrored when she began singing. "Successful" is very sing-songy, and honestly one of the least complex songs we have from Ari. I still like it, though.

It’s a shorter song, but it’s definitely an important 2 minutes and 52 seconds. The premise of the song is what happens when you keep getting pulled back to someone, no matter how hard you try to quit them. Everyone has that one person they just can’t seem to get out of their life… even Ariana! It’s a super catchy, classic Ari song. She even throws in a little laugh at the end reminding us she is here to make silly and fun pop jams.

In a different way than "everytime", "breathin" resonates with everyone, as we all have experienced some form of anxiety. Ariana has recently opened up about her anxiety and how severe her attacks can be. In the song, she mentions how people have suggested she be on medication to curb her stress levels, but she simply relies on breathing. There are moments throughout the song that you hear the music stop all together and it’s just Ariana telling us to breathe. It’s simple, pure, and magical. Despite the lower-key vibe this song has, I felt serious "no tears left to cry" vibes as well. The beats sound similar! Sure enough, check out what song is next on the album.

The first single off of her album, this song is still such a jam four months after its initial release. Another classic Ariana ballad with runs and attitude, this song is positioned perfectly in between a low energy "breathin" and a high energy collaboration.

Can we please get a music video for this song? I would die for the incredible choreography that would inevitably be featured with a woman like Missy Elliott on this track. While her verse was short, Missy Elliott was heard throughout the song in the background. She almost sounded like Ariana’s hype-woman, and I was loving it!

Could this song be about Mac Miller? Let the speculation begin, as this song is all about the hard reality of accepting that you are going to be "better off" without someone in your life. Ariana doesn’t stray away from being honest; she explicitly says she’d rather have a physical relationship with said man than an emotional one. You can’t blame her for being candid, can you? Regardless of what you think of the song, the vocals are simple and beautiful. It’s a contrast to most of the album, as it’s slow and one level.

This is my favorite song off the album, and it’s not even an original Ariana Grande song! As I was looking at the track list, I noticed this song has a particularly unique title, as it’s actually the same title as one of my favorite Imogen Heap songs. Sure enough, the first 7 seconds of "goodnight n go" are a slightly accelerated sample of Imogen’s hit song. There’s a quick transition to a more edgy, soulful verse by Ariana, which is not featured in the original song. Then things get soft and sweet when Ariana closes out the song singing a good chunk of the original "goodnight n go". Similar to "raindrops" in that it feels like she is singing right in front of you, this track also has prolonged belted notes. From start to finish, Ari’s album is fluid, which obviously makes it unique. Another thing Ariana did that strays away from what other artists have been known to do? She added a little techno beat throughout this song to contrast those long high notes she holds. It’s something I haven’t really heard in music before, but I am sure other artists will now try to mimic, because let me tell you, it sounds really good.

The newly-engaged Ariana had to add this song about her future hubby to her album before she could share it with her fans, and it’s basically just her expressing her happiness and joy to have found her soulmate in Pete. While we really only get 50 seconds of Ariana before her voice fades into the crescendo of the symphonic background beat (which is TEXTBOOK Imogen Heap), it’s a cute ode to her love.

The last song of the album, and Ariana ends it with positive vibes. The message of the song is that you can overcome. She sings, “you can work your way to the top,” but it won’t be easy to get there. The longest song off the album, Ari has had her fair share of struggles throughout her career. Since promoting sweetener, Ariana has consistently stated that people need to practice kindness with one another. The song mimics her words -- as Ariana sings about fighting an upwards battle, the beat builds and you feel as though you are nearing the end of whatever feat you may be trying to overcome. You reach that highest peak. It’s always nice to end on a high note.

As I said before, each song compliments the next. You can listen to these songs individually, chronologically, or in your own order and one message will still manifest itself: sweetener is Ariana’s declaration, her story of persevering through heartbreak, confusion, and also happiness. Because she’s honest, the album works. I suggest you give it a listen.