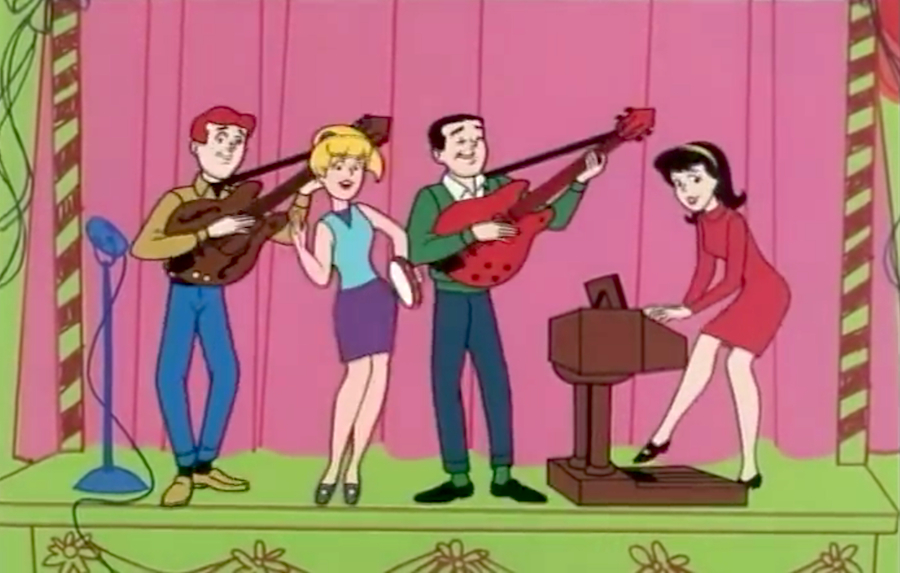 Earlier this year, The CW premiered "Riverdale", their "dark and edgy" modern take on the old Archies comics, and apparently it's kind of a hit! Despite the drastic change in tone from the original comic books, one thing remains consistent -- these characters resonate with audiences. It's been that way for well-nigh 80 years now; even I experienced my own Archies obsession as a kid in the '80s.

There is, however, one glaring omission that "Riverdale" seems to have left out... something that today's audiences probably don't even know about the Archie universe: the fact that Archie and his pals had their own band.

And not only that, they totally released records back in the late-‘60s and early-‘70s. One of those songs even hit #1 on the Billboard charts. Oh yeah. I own one of those records too. Okay, it was actually my parents’ record, but they gave it to me when they became aware of my Archies obsession. The most surprising thing about the album was… the music was legitimately good! You can generally assume that music made for a fake TV show band – one directed at kids, no less – would be cheesy and cloying. But this was some quality stuff! The second-most surprising thing about the album was learning that Veronica had a Southern accent. Huh. Didn’t see that coming.

Anyway, in light of the recent success of "Riverdale", I thought it would be fun to share some of the old Archies music with y’all! Now, in terms of “music videos”, they weren’t much more than clips from their animated TV show, with recycled cells of the gang playing their instruments (Archie on bass, Reggie on guitar, Veronica on keyboards, Betty on tambourine, and Jughead on drums) and some new clips or trippy backgrounds added in here and there. Not too interesting, but the songs were hella tight anyway.

“Sugar, Sugar” – This was the aforementioned single that actually topped the pop charts back in 1969. You can still hear it on oldies stations every now and then. The lead vocals were done by Ron Dante and multitracked to give it the illusion of more than one singer. The video features Archie and Reggie paying Sabrina the Teenage Witch (yes, THAT Sabrina the Teenage Witch) to kiss them.

“Jingle Jangle” – This was another single from The Archies that did pretty well on the charts, sung presumably by Betty (remember, Veronica had the southern twang). Crazily enough, this was ALSO recorded by Ron Dante!!! #mindblown The music video features Jughead’s canine companion, Hot Dog.

“Sunshine” – Out of all these, this feels the most like a product of its time. Let’s get groooovy, baby!

“Candy Kisses” – The Archies had a knack for dabbling in different genres. This one has a cool, jazzy feel to it.

“Somebody Likes You” – Now it’s just getting weird. Everyone is stalking everyone, and it’s kind of uncomfortable. This song is the most teeny-boppy out of all of them I think.

“Who’s Your Baby” – There’s no video for this, but I am including it because it was always one of my faves. It’s basically pillow talk between Archie and Betty, and it’s… kinda hot! I can see why it wasn’t featured on the cartoon!