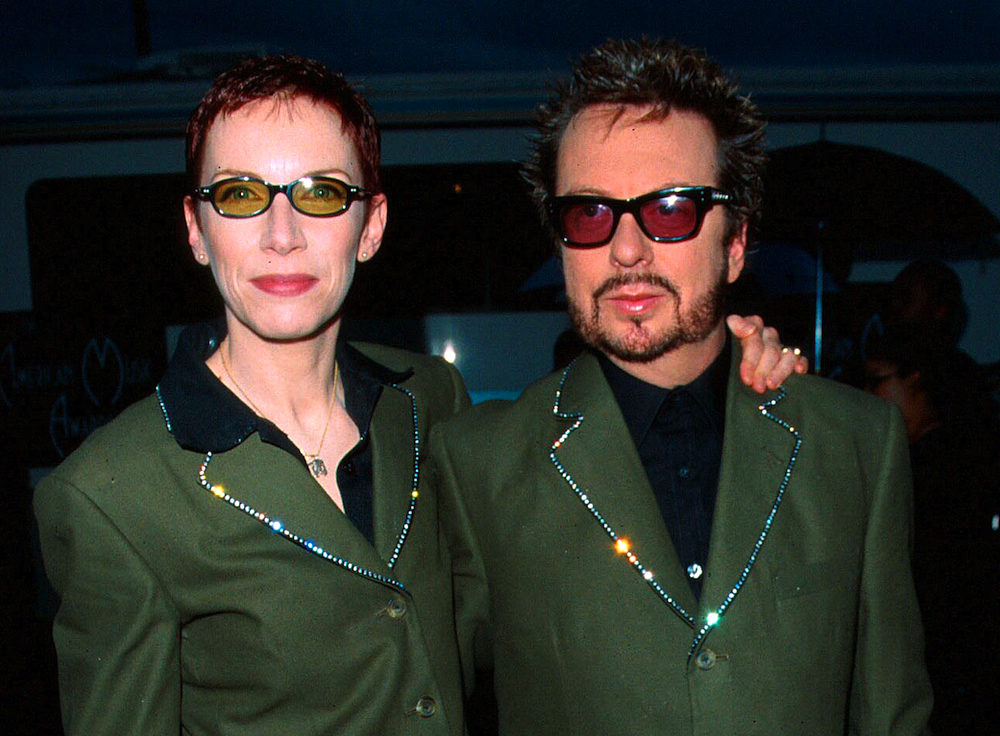 It’s a rare feat when a musician can not only churn out great music but also interesting music videos that do their music justice. For a brief period in the early-‘80s, the Eurythmics had this fully covered.
The New Wave duo from the U.K., consisting of lead singer Annie Lennox and guitarist David Stewart, became a mainstream smash in the States in 1983 when their synth-heavy and moody “Sweet Dreams (Are Made of This)” hit our shores. The song can easily stand alone in its ethereal goodness, overlapping Lennox’s flowing, haunting vocals against electronic beats and riffs. But then they went and made a music video, which echoes the intriguing contradictions of the song brilliantly. Beautiful Annie, with her flawless face and piercing, longing eyes, struts in a stiff men’s suit and sports close-cropped, bright orange hair – a fascinating marriage between light and dark, hard and soft. You’re both attracted to and intimidated by her. After this video came out, Annie became synonymous with androgyny, but for my money, the image she is portraying isn’t so simple as that.
Nonetheless, the duo capitalized on the success of “Sweet Dreams”, figuring that if it isn’t broke, don’t fix it! Thus, “Here Comes the Rain Again” poured down on us in 1984, borrowing many of the same motifs from their earlier hit, but with a gentler, more melancholy feel.
Now firmly in the public consciousness and pop culture, the Eurythmics quickly left their experimental phase behind, opting for a more traditional pop/rock sound. Which is fine, it worked out and they continued to crank out charting hits, but they never again hit the mark so wonderfully as they did with those two aforementioned singles.
Check out “Sweet Dreams (Are Made of This)” and “Here Comes the Rain Again” below, plus two more notable Eurythmics clips – “Never Gonna Cry Again”, their first ever single and music video, from 1981; and “Who’s That Girl” (1983), which features the first appearance of Annie’s male drag persona… the same one that Lady Gaga was accused of ripping off when she debuted her Jo Calderone alter ago a few years back.
Incidentally, music prowess runs in the Eurythmics family, with Dave Stewart's daughter, Kaya Stewart, breaking out in the music biz in her own right... and possibly borrowing a few hairstyling tips from her dad's long-time musical collaborator? You be the judge.
(Photo via WENN)
- Katie Marzullo, YH Staff Editor
[email protected]