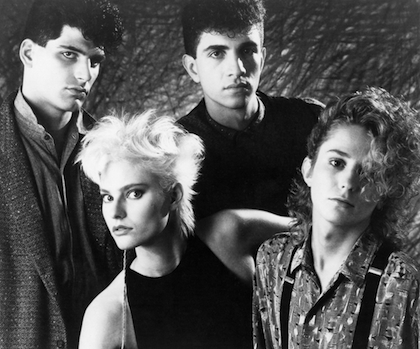 Most folks know Aimee Mann as the serene-voiced singer-songwriter who pretty much penned the entire Magnolia soundtrack single-handedly, with powerful slow jams like "Save Me" and "Wise Up".

What most younger peeps might not know is that Aimee got her big break in the 1980s, fronting the big-hair new wave band 'Til Tuesday. Without a doubt, their biggest hit as a group had to be 1985's "Voices Carry", which actually garnered the band a well-deserved MTV VMA for Best New Artist.

The song -- haunted, grieving, and just flat out gorgeous -- details a painful break-up, and the video follows suit, weaving a storyline about a considerably unhealthy co-dependent relationship between punk rocker Aimee and her stockbroker-looking boyfriend (rarely a good match). As the lyrics state, Mr. Man would prefer it if Aimee behaved like a good little girl and didn't interrupt his morning Wall Street Journal sesh. And for the majority of the video, poor Aimee tries to comply... Until the pinnacle scene at the end in Carnegie Hall, when girlfriend is mad as hell and just can't take it any more! Sublime.

Watch the video below for yourself and try not to get too many goosebumps (and P.S. -- No, that is not Julian McMahon playing the boyfriend):