TV FROM AROUND THE WORLD: "Metastasis" (Colombia) 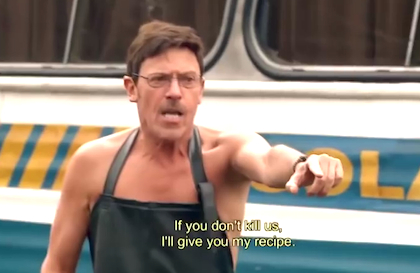 A few years ago, “Breaking Bad” fans were a bit shocked to learn that the classic tale of a chemistry teacher-turned-meth dealer would not remain an American story -- it would be getting a Colombian spin. That's right, “Breaking Bad” was adapted into a Spanish-language shot-for-shot remake set in Colombia under the name of “Metastasis”. The incarnation was complete when they announced that the name of the lead character would be changed from Walter White to... (wait for it)... Walter Blanco. In the great tradition of Spanish telenovelas, a new episode aired every day, and the series ran through five seasons (in American time) from June 8, 2014, to September 18, 2014. Fans of both “Metastasis” and “Breaking Bad” will be happy to know that the entire series is now available on Netflix!

I was amazed at just how close “Metastasis” was to its AMC counterpart. This is, by far, the most faithful adaptation of any TV show I have ever seen, yet “Metastasis” does have its own unique flavor that distinguishes it from “Breaking Bad”. For one, with the exception of Diego Trujillo, who plays Walter Blanco, the rest of the characters look nothing like their American counterparts. Walter’s wife, Cielo (a play on the American character's name, Skyler, as "cielo" is Spanish for "sky"... get it??), is played by Sandra Reyes, who is quite the babe, and his son, Walter Jr, is played by Diego Carzon Flores, who appears far more dorky than R.J. Mitte’s portrayal. However, “Metastasis” does include certain specific character details, such as the fact that Maria (Cielo’s sister, the Colombian version of Marie) wears purple and that Jose Miguel Rosas, who is the Colombian version of Jesse Pinkman (again, "rosa" is Spanish for "pink"), Walter’s partner-in-crime, dons hideous and vibrant jackets.

One of the other things that intrigued me about “Metastasis” was its musical and cultural differences. While “Breaking Bad” had quite a varied and unique soundtrack, most of the music in “Metastasis” is traditional Mariachi and salsa. I particularly enjoyed that Walter had a mariachi band at his birthday, and that Walter and Jose cooked meth to upbeat salsa music. There is a delightful juxtaposition of a man making meth against music that makes you want to cha-cha. As for the cultural differences, it does seem that Cielo is far more passive than Skyler; Cielo is just as concerned about Walter’s well-being, but I will be curious to see (as I continue the series) if she jumps as eagerly into the meth game as Skyler did, or if she pushes back against Walter.

If you are a “Breaking Bad” fan who desperately misses the show and is eagerly awaiting for Season 2 of “Better Call Saul”, then “Metastasis” may tide you over. It’s certainly a unique take on one of the greatest shows ever made!

The entire series is available for streaming on Netflix.