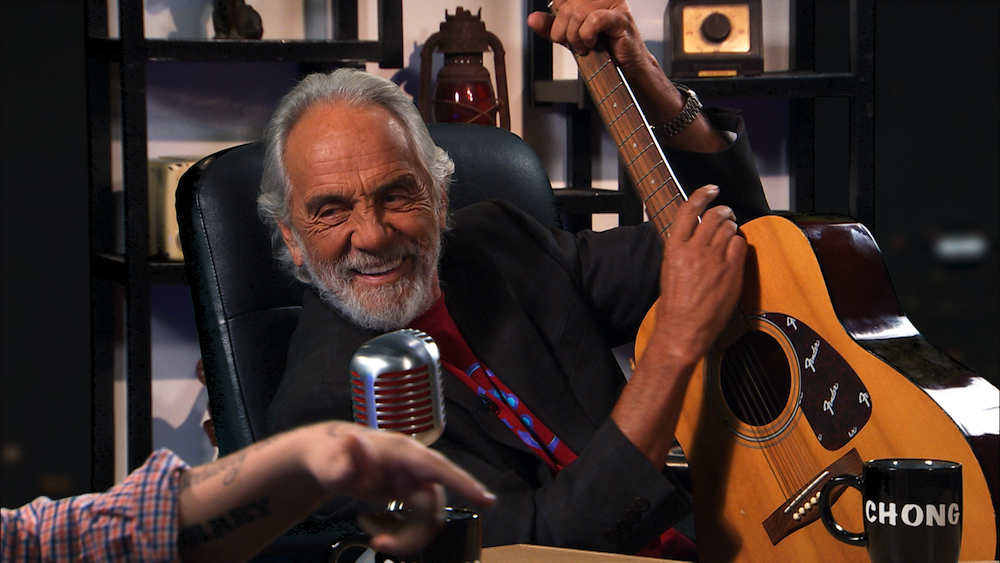 If there's one person who exemplifies the YH motto of "It's not about age, it's about attitude", it's legendary comedian Tommy Chong! Best known as one-half of the classic comedy duo, Cheech and Chong, both him and his partner Cheech Marin have remained in the spotlight for over 30 years when their satirical routine first premiered. Since then, Tommy and Cheech released nine comedy albums and starred in eight films together. Most recently, Tommy appeared as the aging hippie photo store worker Leo on “That 70’s Show!” and strutted his stuff on Season 19 of “Dancing with the Stars”.

Now, Chong is back in action with his very own talk show, “Almost Legal with Tommy Chong”, set to be distributed on FilmOn.com and air on FOTV over Dish Network starting October 23. The show will also be syndicated to WeedMaps in addition to the show's YouTube channel. “Almost Legal with Tommy Chong” will follow the traditional talk show format, including celebrity interviews, musical performances, skits, and Chong’s own unique take on current events. A few of the guests will include Eli Roth, George Lopez, Killer Mike, and Roy Choi.

Despite the fact that he is currently battling rectal cancer, he never once let let break his cheery and charming spirit and was more than happy to chat with me (and laugh at my jokes). He filled me on what we can expect from “Almost Legal with Tommy Chong”, his favorite dance, and his favorite episode from this season:

YH: Tell us a bit about your new talk show, “Almost Legal with Tommy Chong”.

TC: Well, the title kind of speaks for itself. I’ve been on the other side of marijuana for 70 years now [chuckles]. Now that it’s almost legal, we [Cheech and Chong] have to change our tune. We can’t be those rebels, because we won the war [laughs]. So we have a lot to celebrate now. Part of that celebration is my talk show. Another part of it is that I was diagnosed with rectal cancer, so I have to stop the road anyway. I have to take care of my health. So doing the talk show fit in nicely. It’s not a hard gig. I get to meet a lot of nice people. We are trying to feed the big monster called the Internet. There is so much entertainment needed nowadays that we can’t keep up with it. So a little insignificant talk show like this one can be popular with a lot of people. We’re just having a good time doing it.

YH: What can we expect from the show?

TC: At first, some of the guests were friends of mine, like George Lopez and Eli Roth. There’s some younger internet stars like Garfunkel and Oates -- they’re really sweet and cool girls. I’m introducing my old fans to the new up-and-coming internet fans. A lot of the show is just this old icon stoner like me just giving my version of world events.

YH: Did you have a favorite guest this season?

TC: Hannibal Buress, he was on. He explicitly made a point that he did not want to talk about the Bill Cosby outing. However, that information never got released to me. It’s one show where it was kind of uncomfortable [laughs] and a little strange, but it was perfect talk show fun. I think if any show is going to be my favorite, that one will be. It’s embarrassing. It’s all those good things you don’t expect but you welcome. It’s fascinating to watch.

YH: What made you decide to start a satirical late night talk show?

TC: It was my son’s idea -- he’s got a bunch of guys who are working on our website. He is my manager now. One of my managers. It was really his idea. He has a nice overview of me. He saw what I could do and where I was most effective. The talk show being what it is, I don’t have to do much more than just show up and be yourself. He jumped all over it.

YH: You were diagnosed with rectal cancer earlier this summer. How are you feeling?

TC: I’ve got a lot of respect for marijuana as a painkiller. Before that, I used to get high and listen to music. I just enjoyed it. Now, it’s medicine. Now when I have a bowel movement, which are horrendously hard at this point my of sickness, the pain is really excruciating. If it wasn’t for me being able to get high all the time, I would not be okay. That’s what is keeping me mobile and active. It’s just the marijuana.

YH: You were recently on “Dancing with the Stars”. Do you have a favorite dance that you learned?

TC: The Tango. I started studying the Tango years ago. I went to Argentina and I danced the Tango there. My wife is a ballroom dancer, and we took Tango lessons. When I got on “Dancing with the Stars”, it was the only dance that I could actually show Peta [Murgatroyd], my partner. The Tango is still my favorite dance.

YH: Do you and Cheech still spend time together?

TC: Not as much as we should, especially now that I’m sick. When you’re thinking that we’ve been together for almost 40 years, I think that we’ve seen enough of each other. [laughs] So if you get a chance, check out the talk show. If you want to be a guest, let me know! I love everybody!

Be sure to tune in to “Almost Legal with Tommy Chong” online at FilmOn.com and on FOTV at 8pm starting October 23! You can keep up with Tommy on Twitter!