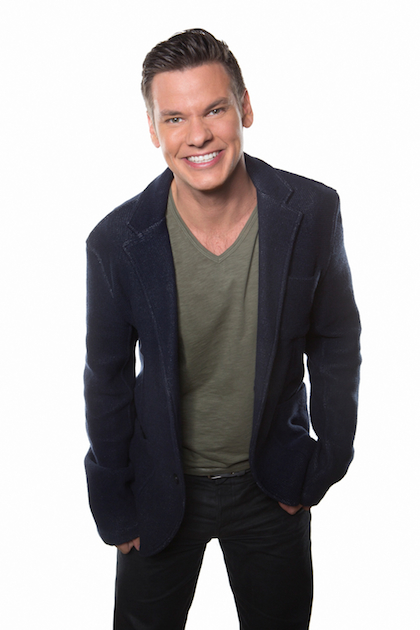 Comedian, host, writer, and prankster extraordinaire Theo Von is (among other things) the host of TBS’s hidden camera prank show, “Deal With It,” which will return for its second season tonight at 10:30pm. Produced by Howie Mandel, the show follows everyday people as they are secretly dared to pull a prank on their friends or family without any time to prepare. If they agree, they must follow directions given to them in an earpiece via Mr. Von and his celebrity guest sitting in a nearby secret chamber. If they can "deal" with their pranks and actually pull it off, they get to win a whole wad of cash. The first season saw quite a variety of interesting pranks, and it looks as though the second season will only get zanier.

Mr. Von’s entre into comedy was rather unusual -- he first began as a contestant on MTV’s “Road Rules” before making his way into the comedy world. He was also a contestant on “Last Comic Standing” and has appeared in quite a few TV shows.

Originally from Louisiana, Theo has an easy way of talking and a charming Louisiana twang. He laughs a lot (not only at his own jokes but mercifully at my own) and is delightfully quirky. During our chat, we discussed the second season of “Deal With It”, what it was like to be on “Road Rules”, and what exactly a "y’at" is:

YH: Tell us a bit about the second season of “Deal With It”.

TV: I can! I actually had more fun filming the second season. There were more moments where I was so enveloped it what was going on. I can only imagine how much the fans will like it. We’ve got some cool celebrities coming in this season, like Nick Cannon will be in the season premiere. It’s fun to be the host and try to add some humor here and there but also make sure the game runs smoothly.

YH: What was your favorite prank pulled in Season One?

TV: I really enjoyed where Bobby Lee was one of my guest hosts, at the restaurant with the gentleman with the dreadlocks speaking in fictional Korean and fictional Japanese, and his girlfriend getting really pissed off at him and bopping him up. He continued to go along with it, he wanted to win the money. That was my favorite. That’s the best thing about the show -- We can turn up the fire as much as we want, but if they wanna roast a little, that’s up to them. It’s so entertaining to see it all go on.

YH: What are some of the pranks lined us for this season?

YH: How did you first get your start in comedy?

TV: I was never the best one-on-one communicator, so being the class clown was always enjoyable for me. If they were laughing, then it meant they liked you, and it meant that everyone was comfortable. If everyone is laughing, then you know, for these next two seconds, I’m cool. I’m in the clear. Now, it’s a job. There’s still a little bit of that class clown, but it’s a profession. You have to make sure you’re on your toes so you can survive. I’m a very repetitious person, so I have to do my jokes over and over before I feel it’s solid. My stand-up also depends on the energy; if the energy is going, then I can keep it up for the rest of the show.

YH: You were a contestant on “Road Rules”. What was that experience like?

TV: I learned a lot. It was cool basically being a college kid and getting to travel around the country, the world, and to be on TV. It was a mix of a lot of different things. We did everything. We went in a hot air balloon, we swam with Great White Sharks, we did free-diving down into the depths of the ocean, we went to Park City, Utah, and visited the Olympic ramps and trained with Olympians... It was ridiculous. It was things that I had never done before, and that was the best part. It was a unique experience. I still have a couple of friends from that whole scenario, which is pretty cool. One of my friends from “Road Rules” is getting married this year, and I’m going to go to his wedding. It should be a good time. I just don’t want to be the one who catches the bouquet!

YH: I have to ask, since you are from Louisiana, how does one properly use the phrase “who dat?”

TV: Since I’m from fairly near New Orleans, I’d call myself a "y’at". People call us y’ats because we say "where y’at?" all the time, so it just became y’at. I think that the phrase “who dat” is just an expression on oneself. It can be a question, it can be a rhetorical question, a statement, demand. It’s just one of those usual phrases that you can use in any situation. It can mean whatever. It’s like the Scrabble tiles that’s just a blank. You could whisper "who dat" to try and put a little baby to sleep, or you could be yelling it or cheering on about something specific. I think it has a vast array of uses. You can start a sentence with it, you can end a sentence with it, it’s up to you!

Catch Theo tonight at 10:30pm on TBS for the Season Two premiere of "Deal With It", or any day of the week on Yahoo TV's "Primetime in No Time"! You can also follow him on Twitter.