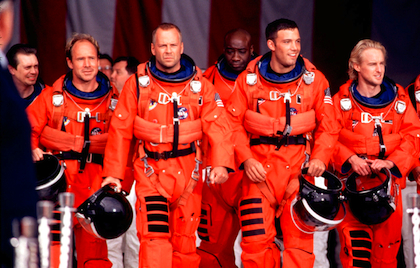 Yesterday morning, most of Los Angeles had a rather rude start to their week when a 4.4 magnitude earthquake hit near Westwood. Of course, this rumble wasn’t enough to stop anyone’s St. Patrick’s Day celebration, but it definitely reminded us that a real natural disaster could happen at any moment.
Everyone should always be prepared in case of emergency. Have a packed bag with clothes and flashlights on hand, and familiarize yourself with safety procedures. Another way to prepare yourself in case of any natural disasters? Watch movies!
Yeah, I said watch movies. But you have to watch the right ones. I’ve put together a list of my Top 10 Natural Disaster Movies for everyone to check out and learn a thing or two just in case the ish hits the fan!
10.The Happening(2008)
Aside from the movie’s irritating way of sending a message to the audience, the premise is quite intriguing (which is why it's #10). All of a sudden, the world is presented with what seems like a terrorist attack, compelling people to commit suicide. Of course, there’s no terrorism that makes people jump off buildings and crash cars. Don’t get me wrong, the ending isn’t one of my favorites, but the movie is interesting and worth the watch. I mean, can you really go wrong with Marky Mark? No. No, you can’t.
9. 2012 (2009)
This movie is based on and addresses the end of the Mayan Calendar and the "end of the world". John Cusackmust survive catastrophic earthquakes and tsunamis just for an opportunity to be allowed on to one of three large “arks” that the government has secretly built for the impending disasters.
8. The Core (2003)
This film shows what happens when a mistreated Earth breaks down, and a group of the most-qualified and skilled scientists and astronauts must travel to the Core of the planet to jumpstart it like an old Chevy. I, personally, loved Aaron Eckhart’s performance in this movie; just another reason to go see it.
7. Volcano (1997)
An overlooked volcano in the middle of Los Angeles(!!) becomes active, and the Office of Emergency Management must come in to divert the flow of lava away from the city. This is definitely a great film that brings back the fear of volcanoes and great performances by Tommy Lee Jones and Don Cheadle.
6. Deep Impact (1998)
In this film, a large comet is heading towards the Earth. If the comet were to crash, it would kill millions of people on impact and its effects would make life unsustainable. The U.S. government enacts many plans to thwart the comet but to no avail. The back-up plan is to have a lottery for placement into underground shelters built for the occasion. Tia Leoni, Elijah Wood, and Morgan Freeman give great depth to their roles, which is worth the watch.
5. The Impossible (2012)
Based on the devastating 2004 tsunami that hit Thailand, the film follows a family on a Christmas vacation when the disaster hits. The family is torn apart, and each member must stay strong in order to survive and have faith to find each other. Naomi Watts was nominated for an Oscar for her performance.
4. The Day After Tomorrow(2004)
This movie amps up some entirely plausible (but largely unlikely) scientific hypotheses about global warming and the effects of humans on the planet. With tornadoes in Los Angeles and huge hail storms in Europe, the world experiences a cataclysmic climate change and a new Ice Age. The film follows the scientist who discovers what has happened and his journey to find his son, who was caught in the danger zone. This is also one of my favoriteJake Gyllenhaal movies, just saying.
3. Twister (1996)
A group of storm chasers encounter a tornado in Oklahoma and use this to test out their experimental new equipment. However, they are challenged by a better-funded research team with their own equipment, and the race to perfect their data devices quickly turns into a disastrous and dangerous adventure. Also, cows.
2. Dante’s Peak (1997)
A volcanologist (played by Pierce Brosnan) is sent to a town called Dante’s Peak to investigate a dormant volcano. After some study, he finds that the volcano could become active at any time... and guess what? It does. He must hurry to inform the town so that they can quickly evacuate before it’s too late. This movie is a real tear-jerker, and if you’ve seen it, you know exactly which part I am talking about. The suspense, tragedy, and emotions get me every time I watch it.
1. Armageddon (1998)
Last, but certainly not least, Armageddon. This movie is, in my opinion, the best end-of-the-world catastrophe movie. A large meteor shower destroys parts of the world, and an enormous comet is headed towards Earth. In effect, the government recruits an oil-driller to go into space and drill the comet into two smaller pieces in order to save the planet. Bruce Willis and Ben Affleck lead the star-studded cast, and Michael Bay does a wonderful job of telling a story of unlikely heroes that has me bawling just from thinking about the last few scenes. If you decide to watch only one movie on this list, let it be this classic. Believe me, you "don't wanna miss a thing!"
These are all great films, but hopefully they stay on the screen and avoid happening in real life, amirite?