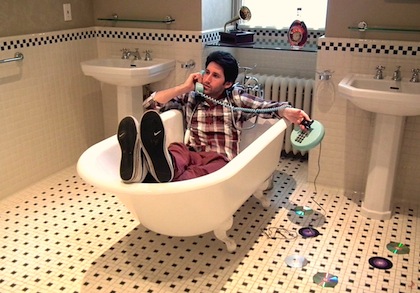 Classics become classics when the music is great but the style gets left behind in the ever-evolving world of music. Every artist uses influences of different music styles, but every so often, an artist comes around who bases their genre of music more heavily on those influences.

One of those such artists is Eric Frisch, who is a New York-based indie pop artist who makes music that sounds very similar to that of music in the '50s and '60s. He cites his influences as everything from The Beatles and The Beach Boys to Sam Cooke, The Four Tops, Bob Dylan, and Jackie Wilson.

His single “Pretty Girls” has a very Beach Boy sounding vibe, with vocals on that beachy, almost echo-y sound and constant harmonizing backing him up. The video for his song “Learn to Swim” starts out simple enough with Eric sitting on a stool and playing the guitar, but then it starts to split screen into him harmonizing with himself and singing different levels of the song seemingly all at once. It’s catchy even at a slow tempo and feels entirely personal.

His debut album Goodbye Birdcage was written in a mere two weeks and tells personal stories such as his journey leaving Toronto for New York to pursue his music dreams. There’s also more than a little pining over girl action weaved in. The overall vibe is leaving the nest and embracing the adventures that come as you go. With heavy influences it can be challenging to shape your own sound, but Eric has managed to so with his own sensibilities infused into each individual song. In addition to the vocals, Eric is also a talented instrumentalist, playing the piano, guitar, bass, and percussion on all of his tracks.