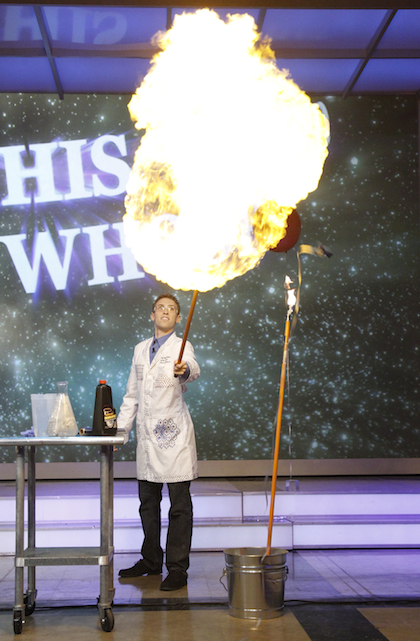 The next Bill Nye? Meet Jeffrey Vinokur, The Dancing Scientist!

For the past few months, The Dancing Scientist, AKA Jeff Vinokur, has been gripping audiences nationwide on talk shows and news programs. The recent UCLA M.S. Biochemistry grad even wowed Whoopi Goldberg on "The View" with his combination of hip hop dance moves and funky fresh science experiments. Take a look at some of his most memorable TV moments below:

YH: It’s kind of weird for a scientist to not only be into dancing but be as good as you are. When did your interest in dancing start?

JV: My senior year of high school was when I really started getting into it. My parents were kind of beginning their divorce, and I just needed an outlet. I went onto YouTube and found dance instructional videos. I first tried learning to break dance, but that didn’t really work out. Then I found out about popping, and I got really good at it, so I traveled to New York City to get a more formal education. There I got integrated into the dance community. Not too long after starting that, I made my instructional videos and got over 21 million hits on my YouTube channel under the name The Russian Tiger. Now I meet people who credit me as their first dance teacher, and then I see them dance and they’re even better than me! That has been an amazing honor and privilege.

YH:  When did you decide to combine dancing with science?

JV: Basically, I’ve always been crazy into science. When I was a young kid, I would try mixing things together in the kitchen; then in middle school, I started making potato guns and then in high school I really upped my game. I got a job at a local hardware store in Montvale, NJ, and would experiment in my garage with different chemicals I got from there. I had a lot of fun, but I can’t let you publish what I did in there. [laughs] But when I really got into dancing, I viewed my life as being a scientist by day and a dancer by night. When I was studying undergrad at the University of Wisconsin Madison, I got contacted by "America’s Got Talent" to audition my dancing skills. It was a great opportunity, but in the end I didn’t make the cut. About a year after that, I was on a flight and got to talking to a guy whose name I can’t remember, who ran an afterschool program for kids. I didn’t really know what I should do with my dancing, and he suggested I combine dancing with science. Shortly after that, "America’s Got Talent" contacted me again, and I pitched them my new act of incorporating science and dancing. They thought it sounded great and asked me to audition again, this time in front of their Executive Producer. Truth be told, I told them a white lie about my act, because I really didn’t have anything planned. So, I got to work in my dorm room and started creating an act as The Dancing Mad Scientist (pre-Dancing Scientist days). Looking back on that time with all the chemicals I had in my room, if anybody came in, they might have called the cops thinking I was running a meth lab. [laughs] I also received guidance from Jim Maynard, who taught me some chemistry demonstrations in the UW-Madison chemistry demo lab. In the end, I made up an act that lasted about 90 seconds, and I made it to Las Vegas into the top 100 out of 70,000 people before getting eliminated.

YH: How did you get more regular work on TV shows?

JV: After "America’s Got Talent", UW-Madison really helped me out by writing stories about me. From there, I got contacted by CBS to do a segment for their local news channel. It basically became a monthly gig for a while, because they kept asking me back. From there Discovery Channel Canada contacted me, and I did five segments for the Daily Planet, which airs Monday-Friday at 7pm up there. It was a great experience. The sets and the lighting were fantastic and really helped give me a beautiful reel. When I moved to Los Angeles, though, I just focused on being a Ph.D student and coincidentally had three knee surgeries, so I wasn’t working in entertainment for a solid year. Eventually, I tried sending in my reel to different talk and news shows but never heard anything back. I realized Hollywood is full of gatekeepers. You can have a lot of talent, but you need to get in contact with the right people to help you open doors. I was fortunate enough to meet the right person for me, my publicist Ellin Sanger, who I can’t thank enough. Ellin sent my reel to all the shows that I never heard back from before, and like magic, I was getting booked by them. She keeps me grounded though, because just as fast as you climb in this business, you can fall out of view even quicker.

JV: Short term, I’m trying to get booked for TV show segments and doing shows for kids at schools. The TV segments I do don’t always pay in cash, but they’re a great investment in advertising my act. They give me the chance to show off my act to a wider audience, and that gets the attention of schools which pay me to put on shows. Plus, doing shows are always fun. Long term, the investments I’m making in displaying my act on TV segments keeps adding to my reel, so someday I have something to pitch to producers, and hopefully I can get a kids TV show. My ultra long-term goal is to make the switch from kid’s science entertainment to having a show geared more for adults.

YH: Who are your inspirations?

JV: I’ve always been curious about science and how the world works, but teachers I’ve had in the past definitely helped me out. In high school, I had great teachers named Jack Lehman, Martin Shields, and Martin Edleberg. They were really into doing experiments and teaching us more than the textbooks had. They really opened my mind to a wider world of science. I’ve traveled to a lot of schools performing my act and was shocked when I saw students don’t dissect frogs anymore! Instead, they do it virtually. I feel like kids are being robbed of a memorable experience. I’m just happy that I had all of that and more growing up with science. As far as TV goes, of course there’s Bill Nye the Science Guy and Neil deGrasse Tyson, but I always really loved Steve Irwin. He is inspiring to me because of the passion and excitement he genuinely had for animals. I always loved that about his show and thought, “Why can’t I apply that to science?” I feel like every generation needs a person to inspire science. It’s hard, gritty work, so as a kid, you need someone to show you the bigger picture of science. That’s what all these people did for me. I’d like to be ONE of those people. I say "one of those people" because there’s plenty of room for more than one.