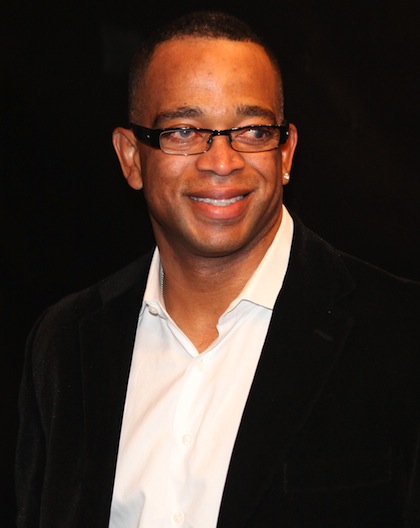 “You can beat cancer by how you live, why you live, and in the manner in which you live.” – Stuart Scott

Sadly, the much-loved ESPN sports reporter, known for blending a hip-hop vibe into the sports that he loved, lost his fourth battle with cancer over the weekend. True, there had already been successful African-American sportscasters before Stuart came along, but he is best known in the sports world for bringing black culture to the forefront of the sports where so many African-Americans have played and will continue to play.

It may seem silly now to think about a grown man using catchphrases when sports casting, especially when he’s saying things such as “Boo-Yah!”, “Holla!”, “He must be the bus driver ‘cause he’s taking him to school!”, and (my personal favorite) “As cool as the other side of the pillow.” (It’s also my favorite side of the pillow!) Everybody does that these days, right? What a lot of people may not realize is that Stuart was the pioneer for the way people talk about and approach sports in general.

Instead of reading about how his voice and attitude brought something different to sports journalism, let’s take a listen to some of his catchphrases ourselves as spoken to us by his friend and co-anchor Rich Eisen:

Scott himself came from the high school football fields of Mount Tabor High School and Richard J. Reynolds High School, both of which are located in North Carolina. Feeding his life-long love of football, Scott became the team captain of his high school, which is a good step to make you want to play Division 1 football at the University of North Carolina… and, yes, he did that too!

At UNC, Scott served as both a defensive back and a wide receiver, something that very seldom happens these days in college football. But just being a college football player wasn’t enough for Scott -- he also decided that he would like to report on other sports around campus, so he became on-air talent for UNC’s student-run broadcast station. After he graduated, and saw that perhaps playing for the NFL wouldn’t be an option (or maybe not the best one), he hopped between a couple of local news stations where he reported on sports and created catchphrases until he arrived to a different sort of big league on ESPN! In fact, let’s check out his first show with commentary from Scott himself:

After that first show, the rest was history. After taking a football to the face during a Jets mini-camp in 2002, he was left with his trademark lazy eye. (Not really something he "achieved", but who else can honestly say they’ve had that happen to them and wear it with pride as he did?) He went around meeting Bill Clinton, Barack Obama, various celebrities, and some of the greatest sports players of all time. By the time of his death, Scott was the person that a lot the greatest players in sports were starstruck to meet themselves. He accomplished a lot, but what he is without a doubt most proud of are his two daughters whom he survived by, Taelor and Syndi.

Below is Stuart Scott’s acceptance speech during the ESPYs for the Jimmy V Perseverance Award. Scott is even given the award by Kiefer Sutherland, the star of Scott’s favorite show of all time, “24”. At 13:10, Scott begins to talk about his daughters. Have your tissues ready:

And also check out this little tribute cooked up by ESPN themselves, which nicely sums up Stuart's legacy:

Rest in Peace, Stuart Scott. I know wherever you are, you’re keeping things cool like the other side of the pillow.