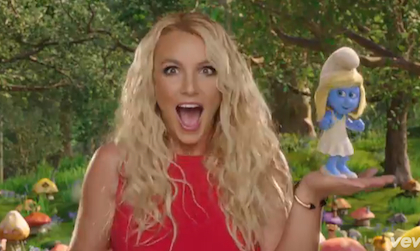 This news makes the song that much better.

Britney Spears’s song “Ooh La La”, for the upcoming movie The Smurfs 2, is already a super catchy and fun jam as is. A new tidbit of information just amped up the cool factor: Katy Perry is in it!

Now, don’t go beating yourself up over the fact that you didn’t notice her vocals the dozens of times you have listened to the song. On the blue carpet for the Los Angeles premiere Sunday, Katy revealed, “Me and Bonnie secretly did some background vocals on that song. So maybe listen for our voices.” The woman she is referring to is someone who works with Katy frequently, Bonnie McKee.

Does it get much better than two of pop’s biggest names singing in one song? “Ooh La La” is played over the end credits of the family-friendly flick, which makes its way into theatres Wednesday (July 31). Trying to hear Katy’s background vocals definitely makes it worth staying in your seats until the very end.

Check out the most adorable visuals for “Ooh La La”, featuring Britney’s sons: