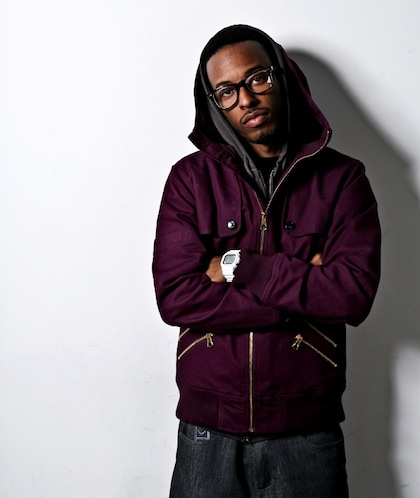 Shawn Chrystopher is an up-and-coming rapper/producer whose debut LP, The Lovestory, was just released on iTunes. The album was executive produced by none other than superstarTimbaland! Born and raised in Inglewood, CA, Shawn’s lyrics often tell stories of his experiences growing up and of those around him. Shawn chose to tell a series of stories about love for his new LP, as love is the one emotion that relates to us all and ties us all together (pretty neat, right?).

We caught up with Shawn to talk about all the goings-on since our last chat, including his new album, working with Timbaland, and what it was like to have a party held entirely in his honor:

YH: Tell us a bit about your new LP, The Lovestory.

SC: It’s basically a compilation of songs/stories that I’ve gone through in my life, and seen through my peers. It’s about everything that I feel that everyone can relate to. Love is the one thing that people can relate to the most. There’s songs about clubs, random things, etc. But the one thing about us is that we’ve all been in love, or we love someone, rather that’s family or friends. I wanted to create this album, and I feel that it’s the most relatable project out right now. It’s real. It’s exactly what the title is. It’s a story of love.

YH: The Lovestory was produced by Timbaland. What was it like working with him?

SC: Working with Timbaland is amazing. He’s such a perfectionist. I’ve been to studio sessions where he’s working on the same record over and over. I will watch how meticulous he is with everything that he does. He will listen to his stuff over and over again, in the car, in the studio, everywhere, and then go back to the studio and fix it up. I adapted some of those traits. The first time you write a song is like the first draft of an essay. Would you turn in the first draft of an essay? You rewrite it, you make sure it sounds good, you have someone else read it (because you might miss the typos the first time). And you have to do the same thing with music. That’s one of the things I’ve learned working with him. As big as he is, he’s still a down-to-earth guy from Virginia.

YH: Can you tell us a little bit about your childhood, and how that influenced your music?

SC: Growing up in Inglewood definitely influences my music. I write about the things around me. Sometimes it’s really hard for me to be so honest and real with what’s going on around me. I still live in Inglewood and listen to the music that’s coming from there. I still talk to the people. I write about everyday experiences. I find the experiences normal, but I ask myself if they are extraordinary? To me, it seems normal, because we’re all still living here. But when I went out on tour last year, I was able to see the people in Omaha, Oklahoma, Iowa, etc, and realize that they didn’t live the kind of life I did growing up in Inglewood. They are living the “L.A. life” vicariously through me and my music. I have to maintain who I am  and stay true to where I’m from in order to give people a true insight. Since I grew up in Inglewood, I’m able to adhere to the stereotypes of L.A. as well as go away from that when I’m making my music.

YH: When did you first become interested in music?

SC: Middle school. My mom was a single mother, so she put me in music at an after-school program. I had a great band director, who really saw my potential. He paid more attention to me than some of the other kids. They were just there to be there, but he saw that I had a deep love for music and encouraged me. One of my first tapes that I brought was Kris Kross. I wanted to be Kris Kross. To be in music classes, to listen to the notes and play the instruments, I realized that this was where it all came from. Since middle school, I’ve been intrigued by the composition part too, as well as the rap. I started producing as well. I produced half my album. Thank God my mom needed to put me somewhere, because  I channeled all my energy into music. I started playing the drums, then the trumpet, and finally piano. I can also play the French horn. I haven’t learned how to play guitar. I’ve heard that once you learn how to play the guitar, you can learn how to play anything. Hopefully I’ll get sometime to learn how to play the guitar too.

YH: Talk a bit about your work with schools to get music programs back.

SC: I’m growing concerned because they’re taking music out of the schools. I know that there isn’t as much money going into arts education as possible, but it’s those programs, like music, drama, basketball, etc., that gets kids even excited to go to school. When you take those things away, it’s like, “now all I have to look forward to is history and math.” And people aren’t as excited as much. I try to talk about that as much as possible. I’m working on my own foundation right now. I really like to talk to kids. One of the main reasons why is because, when I was in school, we had these unrelatable guys come talk to us, who had never been through what we were going through. They would tell us how to live, and they were 50, 60 years old. They couldn’t connect with us. While I’m still young, I want to talk to the kids who are less then 10 years younger than me. I want to use my powers of “fame” for good. I want to tell people that it’s possible. You won’t really believe someone who hasn’t been through what we’ve been through. I am relatable, and I want to be that person.

YH: You recently had a listening party for The Lovestory at the Rap Genuis House; what was that like having a whole party dedicated to yourself?

SC: I’m a musician, an artist, but I really don’t like attention. I love to perform. I get to stand on stage and do what I do and watch everyone rock out. But the whole interacting with people thing makes me kind of nervous. The party was kind of nerve-wracking a little bit. I was a little late, actually. We made it as family-oriented as possible. It was really friends of friends. It was a private event, we didn’t do social networking pushing or anything like that. The guys at Rap Genuis have been supportive for years and we’ve been friends. They have this new house, and I said we needed to christen it, we need to have a party! It was really easy. It was like, “let’s have a party,” and we did. It turned out to be an amazing event. I worked so hard on this album, and not everyone is going to be able to listen to it the way I would like them to. I liked having people hear the album the way I wanted them to hear it. We had little listening stations where people could listen to it. It was great to have people experience it the way that I want everyone in the world to hear it. I had people telling me that they liked it. It was a great night.

YH: Who are some of your favorite musicians?

SC: My all-time favorite is Tupac. He was so passionate and real with what he was saying. People compare him toBiggie, but Biggie was a very different rapper. He was a metaphor rapper. He used a lot of similies/metaphors in his raps. Tupac was just straight up. Biggie had this line (withJay-Z) on a song about his ex-wife where he said, “If Faith had twins, she’ll have Tupacs.” Tupac started the song (about the same thing) with “That’s why I f***ed your b****.” That’s really different. Tupac just lets you know what he’s thinking literally. I love that. He’s the reason why I rap.