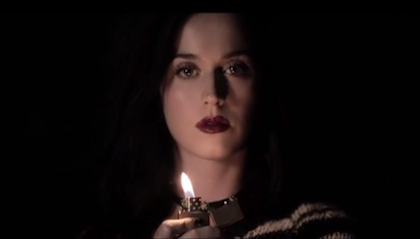 Well, that settles that. The bubblegum-and-candy-cane days for Katy Perry are OVER!

Ever since announcing her much-anticipated third studio album (well, her third as the Katy Perry we all know and love), she has promised that her fans are in for something altogether different than the decidedly fluffy, party-friendly fare she put out with her previous two albums, One of the Boys (2008) and Teenage Dream (2010). And by different, she means darker. Girlfriend is pushing 30 now, y’all… Time to grow up. Time to put away that blue “California Gurls” wig. Or set it ablaze… Baptism by fire anyone?

And while this turn toward the darker side might seem like a “new” direction for Katy, it’s actually more of a return to her roots. It might be easy to forget, but reach back into the farthest reaches of your memory bank to recall your first introduction to Katy Perry… For me, it was the release of her first single, “Ur So Gay”. Yes, I know, Katy Perry: Part of Me and every other source will tell you that her first official single was “I Kissed a Girl” and that “Ur So Gay” was just a “promotional” single. But look – she made a music video for it and everything, and indeed it was my first impression of the former Katy Hudson. I thought it was delightfully quirky and irreverent, and I immediately went out and had my hair dyed and cut the same way she did in the video (true story). Most of all, it was accessible. In the subsequent months after “I Kissed a Girl” took over the airwaves, Katy Perry became something entirely different from the offbeat singer-songwriter we first became acquainted yet. She became a bona fide popstar brand, playing sold out mega-concerts all over the world and fashioning herself as the premiere pop princess of the last 5 years. A far, FAR cry from the wide-eyed, guitar-strumming songstress of “Ur So Gay”…

Now comes her new album Prism, and its first single “Roar”, both of which we know nothing about except that it probably won’t have anything to do with whipped cream bras and that the album will be released in October and the single will drop a week from today (August 12).

I’ve always enjoyed Katy Perry, even though she feels a bit like, ahem, “The One That Got Away”, and I am crossing my fingers that this next album will see a return to the more thoughtful, grassroots artist we once knew and not the “brand”.

UPDATE! Here's yet another teaser that was released just this morning!