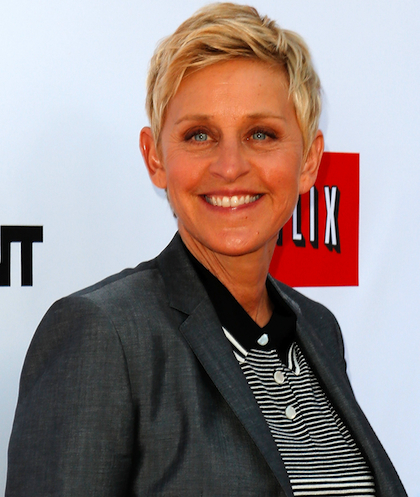 Hot off the presses! It was just announced bright and early this morning that, despite speculation that the decidedly divisive Seth MacFarlane would return to host the next Oscars telecast, those duties have officially fallen into the capable hands of one Ms. Ellen Degeneres!

The news comes just days after the Academy of Motion Picture Arts & Sciences elected a new prez, Cheryl Boone Isaacs (a lady! weee!), and one must wonder if these two developments aren’t somewhat related – if you’ll remember (or maybe you’ve already blocked it out), MacFarlane was widely accused of being rather misogynist in his Oscars material. But with a woman now leading the AMPAS, what better way to smooth over those criticisms than by approving the very family-friendly and female Degeneres to emcee the event?

It’s a minimal risk for all involved too, as this would be Ellen’s second trip to the Oscars stage, having done the deed way back in 2007. Don’t remember? That’s okay, neither did I. But perhaps that is a good thing. At the end of the day, the Oscars should be about the films and artists honored and not what crazy things the host said or did. Ellen is a classy gal and an expert on getting audiences on her side – a skill she has perfected after years as a stand-up comedian, sitcom star, and the host of her own mega-successful talk show. Nobody is gonna be wandering, “Omigosh, what’s Ellen gonna do??” leading up to the ceremony. Instead, they’ll be asking the things they SHOULD be, like who is gonna win Best Picture and who will have a wardrobe malfunction? That’s what it’s all about! Congrats, Ellen!

Refresh your memory with Ellen's opening monologue from the 2007 ceremony:

What do YOU think about Ellen (re)hosting next year’s Oscars?