In Defense of Lana Del Rey... 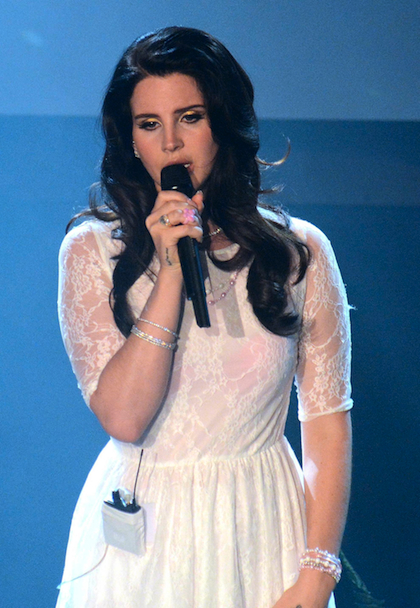 Prior to this past Saturday evening, Lana Del Rey was poised to be one of the breakout musical acts of 2012, and her performance on “Saturday Night Live” (hosted by none other than Daniel Radcliffe) was supposed to catapult her there.
Well, things didn’t quite work out that way. Immediately following Lana’s performances of two songs off her as-yet unreleased debut album (under her new stage name), the blogosphere went ballistic on the 25-year-old, lambasting her performance to the point of claiming it was the “worst” in SNL’s history.
Really, guys? The “worst” ever? Let’s think long and hard about that one, okay? I watched that episode on Saturday night, and it did not even occur to me that it was even bad, let alone “the worst.” Maybe I wasn’t paying hard enough attention, but I saw nothing in either performance that would indicate to me that Ms. Del Rey had bombed or, even worse, turned in a career-ending performance.
Here are a few reasons Lana Del Rey’s SNL stint was NOT “the worst” ever:
1. She sang live. How many performers these days even attempt that anymore? And how many that do are even able to stay on key? I seem to remember a certain blonde singer’s little sister who got caught red-handed with a sync track and became the laughingstock of the industry immediately after. It’s one thing to need to lip sync because you’re also busting out some ridic dance moves, but this gal wasn’t. And neither was Lana. She’s a singer, and so she sang. And she did a lot better than you and I ever could.
2. She’s not “mainstream.” Part of Lana’s appeal to the music world at large is that she is a contemporary throwback – infusing a jazzy, soulful sound into her haunting, almost bluesy tracks. Still, Lana was criticized for just going out on the SNL stage and standing there and singing. You know, like she was hired to do. Was she supposed to come out in a meat dress surrounded by a dizzying laser light display? Adele doesn’t need that nonsense; just a microphone, a voice, and soul-clenching songs. Okay, so maybe Lana isn’t as polished as Adele, but her music speaks for itself.
3. I’ve seen worse. I’ve seen multi-platinum gazillion dollar artists take to the stages of much bigger venues and do an even shoddier job. Not all brilliant talents are necessarily good live performers. Perhaps the studio is Lana’s comfort zone, and that’s where she will continue to shine. Perhaps she was nervous Saturday night, which is understandable under the circumstances. But I certainly don’t think it was a career-ender.
In short, give Lana a break. Stop giving her a hard time for her “make-over” (unless you want to throw Gaga under that bus too, because you will have to) and focus on the product she is putting out, which, so far, is quality stuff. If, when her Born to Die album is released on January 27, she fails to measure up to the fantastic singles she has already given us, then we can revisit this conversation.
(Photo via WENN)
- Katie Marzullo, YH Staff Editor
[email protected]