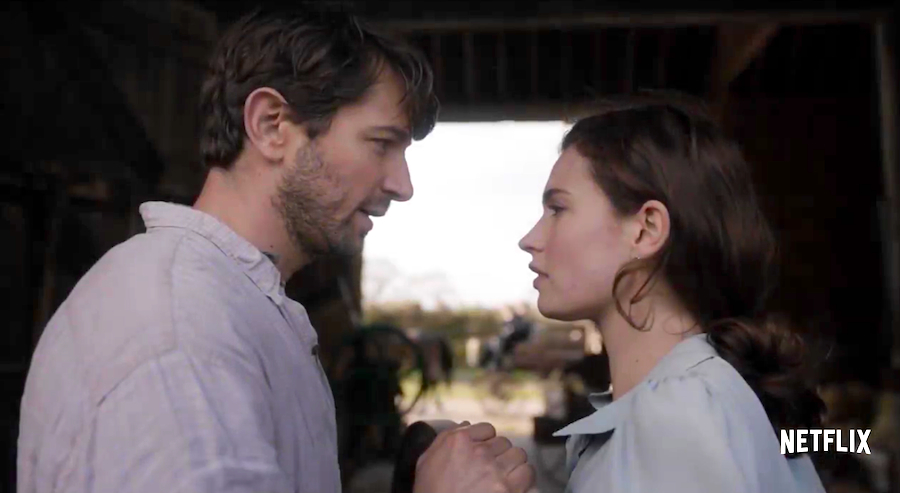 A Netflix original film based on the book of the same name, The Guernsey Literary & Potato Peel Pie Society, may have a title that’s hard to remember, but this is a charming and heartfelt film that you won’t easily forget. From director Mike Newell (Harry Potter and the Goblet of Fire), the film focuses on writer and journalist Juliet Ashton (Lily James) in post-World War II London following the success of her latest book, which was published under a male pseudonym and was rather comedic in tone. Ashton begins receiving letters from an admirer of her work, Dawsey Adams (Michael Huisman), who lives on the island of Guernsey, and is part of the Literary and Potato Peel Pie Society. Curious to learn more about this society devoted to literature and strange culinary concoctions, Ashton sets out for Guernsey and learns about the tragic history of one of the group’s members, while also establishing a bond with the rest of society that changes her life forever.

The character of Juliet Ashton offers a lot for viewers to take away with them after finishing the film. She’s strong in her determination, not just to tell meaningful stories, but to tell them right and in a truthful manner. She doesn’t just go to Guernsey to get the scoop for an interesting feature, but rather truly wants to connect with these people and let her words reflect her experience. She doesn’t always trust her abilities, making her relatable in her anxious desire to do justice to the people she’s met by telling the best story possible. James, coming off her big roles in Baby Driver, Mamma Mia 2, is also incredibly charming and convincingly establishes Ashton’s intelligence and admirable sense of empathy. It’s incredible watching her work and she steals every frame she’s in. The film is worth watching for her performance alone, a performance that may be the best of her career.

Huisman is another standout, showing a different side of his acting range than what “Game of Thrones” fans are used to seeing from the dashing rogue Daario Naharis. His character carries a lot of the tragic weight of the film, but he also has some charming chemistry with James. Glen Powell continues to strengthen his resume in a solid supporting role as Ashton’s fiancée, providing a smaller dose of charisma than he did in such leading roles like in Everybody Wants Some!! and this year’s Set it Up. Matthew Goode offers a supportive presence as Ashton’s publicist, and the cast playing the members of the society are charming, funny, and provide touching moments throughout the film, mainly when acting opposite of James.

The costume work and sets will transport you right into 1940s England, and the beautiful location of Guernsey will consistently have you thinking to yourself, “I want to live there.” The film also weaves in beautiful musical work from composer Alexandra Harwood, making her a promising female composer whose career you should keep a close eye on. She helps a beautiful looking film sound beautiful as well.

The book, which was published in 2008, was written by Mary Ann Shafer and Annie Barrows and was written in the style of letters from Ashton and Adams, which makes it an intriguing read for those who enjoyed the film. With a beautiful setting, and touching, memorable characters, it’s certainly a challenge not to enjoy your time in Guernsey.