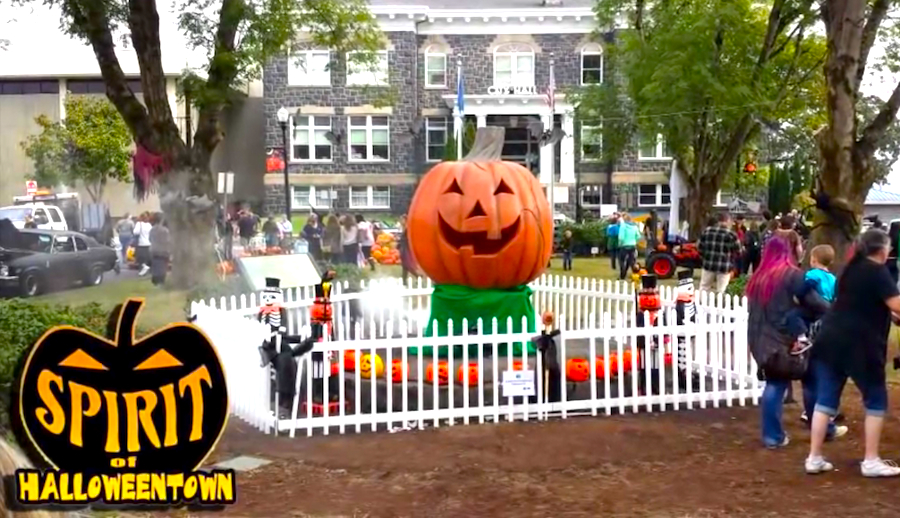 Hey there, boys and ghouls. October not spooky enough for you yet?? Well, have I got some news for you. Halloweentown, the iconic Disney Channel original movie, is GOING TO BE A REAL PLACE! This is not a drill -- Halloweentown will be a physical location for the entire month, and I couldn’t be more excited.

So here’s the lowdown on how all of your Halloween dreams are coming true: Every year, the charming town of St. Helens, Oregon, completely transforms itself into the town from the movie, complete with a wide array of details to fully put you in the Halloween spirit.

To prove how serious the city is about its Halloweentown heritage, they even added in an entrance arch in front of their Plaza Square that displays the movie title!

Now why is St. Helens so in to Halloweentown? The Oregon city is actually the location of the original movie, and the residents decided that, just because the movie was done shooting, they didn’t have to let their town go back to its less exciting non-Halloweentown aesthetic.

And so, every October, the city puts on its “Spirit of Halloweentown” festival, where everything fun and frightening from the film is brought to life.

Some of the festivities include pumpkin carving competitions, haunted tours, and the opportunity to rub elbows with the star witch Marnie (Kimberly Brown), who visits the festival for one weekend each year.

For now, I’ll stick to rewatching the original film since Oregon is a little out of my way, but I salute this great town and its people for making me believe in the Halloween spirit again.

Huge fan of #Halloweentown? The spookiest holiday takes over St. Helens for a festival that lasts all month: https://t.co/ukCeaqb0pC#PDXpic.twitter.com/3EW8Hs9086