Celebrate The Upcoming Final Season of "Derry Girls" With These 7 Iconic Moments! 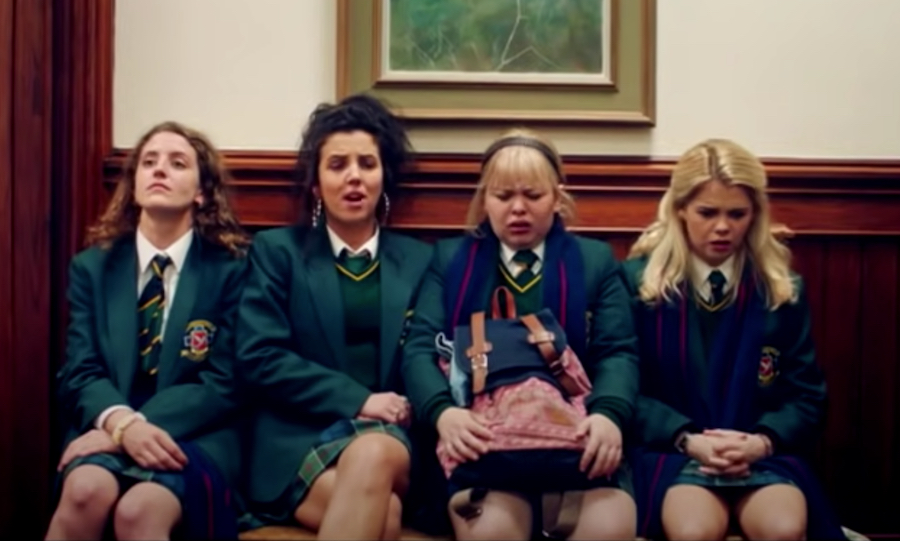 All good things must come to an end. Fans of Irish besties Erin Quinn, Orla McCool, Clare Devlin, Michelle Mallon, and James Maguire have just received the most bittersweet news ever: Season 3 of “Derry Girls” is officially on the way, but it’ll be the final one.

For those of you who haven't seen "Derry Girls" yet... First of all, what are you waiting for? Go fire it up on Netflix asap! But secondly, "Derry Girls" takes place in the '90s and follows a group of Catholic school girls in Derry, Ireland, during the waning days of "The Troubles" -- a dark, decades-long period in Irish history that saw a bloody civil war between Northern Ireland and the Republic of Ireland. Not exactly what you would immediate associate with a sitcom, but somehow the writers make it work, infusing the show with a perfect balance of laughs amidst the chaos. It also serves as a good history lesson too. For example, did you know that, on St. Patrick's Day, Irish-Catholics wear green and Irish-Protestants wear orange? Thanks, "Derry Girls"!

Emotions are plentiful and mixed right about now, but that doesn’t mean we can’t look back at our favorite moments from the show as we wait for what’s to come in this third and final season!

1. The Gang “Kills” a Nun in Detention

It’s only the first episode and we see one of the most chaotic scenes in the entire show. While in detention, Sister Michael walks in on the following: James peeing in the corner, Clare ravenously assaulting a piece of candy after fasting for an Ethiopian child, Erin escaping out of a window,Michelle stealing lipstick out of Sister’s purse, and Orla lifting up the head of the freshly passed away (from heart failure) but ancient Sister.

2. Literally Any Scene With Sister Michael

Let’s be real -- the head nun, Sister Michael, carries this show and is arguably the best character. We’re fascinated with her as a character (including her snarky comments and generally bad attitude) and would love to see an arc through the third season. We saw a little change shine through on the final episode of Season 2 when the Clintons visit Derry. She tells teacher’s pet Jenny Joyce to live a little, letting go of the strict no-nonsense edge she usually carries.

3. Orla Thinks the Children of Chernobyl Glow in the Dark

After the Chernobyl disaster in ‘86, the Derry community opens their homes to the kids affected by the explosion. The Derry girls are exposed to edgier, more grown-up teens from Ukraine, meanwhile sweet weirdo Orla just wants to know if they glow in the dark.

4. Clare Comes Out as the Wee Lesbian

After submitting an anonymous essay about being a lesbian, Clare comes out to Erin as the “wee lesbian” from the essay published in the paper. From then on, the gang wears rainbow pins on their denim jackets and are super supportive of Clare, and we love it! We’d especially love to see Clare have a potential love interest in the third season. (Fun Fact: Clare is played by Nicola Coughlan, whom you might recognize as Penelope Featherington from "Bridgerton"!)

5. We Learn the Differences Between Protestants and Catholics

6. Michelle Brings Edibles to a Funeral

Michelle decides to bake some weed-infused scones and secretly bring them to a funeral. The problem? They’re taken and are passed around to all the other funeral-goers. While trying to get them all before anyone eats them, Michelle wants it known that she will not put a scone up her butthole to hide the evidence. Fair enough.

The absolute most heartfelt and touching scene in the entire show (so far). After being relentlessly bullied and mistreated by almost everyone for being (a) the only boy in an all-girls school and (b) being English, James is finally accepted and shown love from his friends after exclaiming from the rooftops that he’s a Derry Girl. We cannot wait to see this new revelation in Season 3 and how James’s relationships and confidence changes.

What are you favorite "Derry Girls" moments?