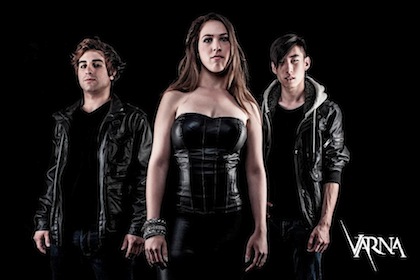 Although hard rock is a genre muddled in the mix by a lot of the indie and synth-pop tunes that are extremely popular and always crowding the airwaves, a band like the promising Los Angeles-based Varna can definitely reinvigorate a category of music that is often ignored and mocked by the many faux-hipsters and hypebeasts of the 2010s.

Consisting of members Tiana Woods, Rossen Pinkas, and Rob Shin, and formed three years ago under the name Living Eulogy, Varna is evocative of an early-2000s Evanescence, with their heady lyrics and soft female-fronted vocals paired with hard, edgy, rock 'n’ roll instrumentals. Although a lot of rock fans miss the way Amy Lee dominated the market, Woods does not fail to impress and is definitely worthy of her own set of praise and recognition as a strong female lead vocalist in the male-dominated world of rock music.

Still currently independent artists, Varna have so far released an EP, 2012’s This Time, It’s Personal, and continue to tour and release music. Their hustle is not in vain, though, and it is surely only a matter of time before their fans see them on record store shelves as major label artists.

Some good Varna records to introduce yourself to this rocking trio include “My Heart” (favorite!), “Down”, and “Running Away”.

So what are you waiting for? There’s absolutely no shame in blasting hard rock in this day and age, especially if you’re blasting the likes of Varna!