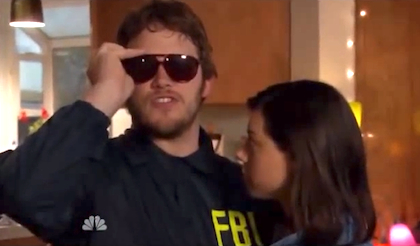 It’s time to grab a plate of waffles and celebrate, “Parks and Recreation” fans! The final season (although that news isn’t as happy) will start on January 13 at 8pm on NBC. Back-to-back episodes will air up until the series finale (that’s just an eyelash in my eye, I’m NOT crying!) on February 24. Little is known about the final season, beyond the fact that it takes place three years in the future (in 2017), and Rachel Dratch, Jon Hamm, Natalie Morales, and Megan Mullally will all appear as guest stars (this means that scheming librarian Tammy II will return to wreak some havoc!).

In honor of “Parks and Recreation’s” return, I would like to pay homage to a special man it introduced us to: Chris Pratt. Long before he was the studly star of Guardians of the Galaxy and Jurassic World, he got into all sorts of trouble as Andy Dwyer, Pawnee’s biggest goofball. In the first season of “Parks and Recreation”, Andy was introduced as Anne’s (Rashida Jones) boyfriend, who fell into a pothole in the adjoining lot next to their house (thus how they met the Parks and Rec crew). As the show went on, Andy later dated April (Aubrey Plaza) and married her after one month in the world’s cutest wedding ceremony before becoming Leslie’s (Amy Poehler) assistant. A lot has changed for Andy over the years, but he is still adorable. To celebrate Pratt’s rise to stardom and Andy’s growth as a character, here are some of Andy’s greatest moments:

One of Andy’s best running gags is that, for no apparent reason, he and April will transform into their cooler alter egos: Bert Macklin, a tough FBI agent, and Janet Snakehole, a black widow. I love their attempt at a Bert Macklin movie, in which Andy runs through a glass door.

During one of Leslie’s attempts to take over the world, she decided to run for City Council. During a campaign event, the TVs break down, and Andy is left to keep her campaign donors interested. Instead of giving a rallying campaign speech, Andy decided to reenact the cult classic Patrick Swayze film, Roadhouse. I much prefer Andy’s version (those campaign donors should be a lot more interested!).

When Andy and April Visited the Grand Canyon:

In a particularly sweet episode, Andy and April decide to attempt to do as much on Andy’s bucket list as possible (thus how the Bert Macklin movie is made). One of these involves driving cross-country overnight to see the Grand Canyon. The couple’s awe over the Grand Canyon is endearing, but it’s Andy’s enthusiasm over actually LIVING there that makes this the best:

A key part of Pawnee’s lore is Lil’ Sebastian, who is... well, a little horse. Sadly for the residents of Pawnee, Lil’ Sebastian dies, which leaves Ben (Adam Scott), Leslie’s husband, very confused. To honor Lil’ Sebastian, Andy writes him an a sweet song. My favorite version of it is played at Pawnee’s Unity Concert, in which a holographic Lil’ Sebastian appears on stage:

What are some of your favorite Andy Dwyer moments?