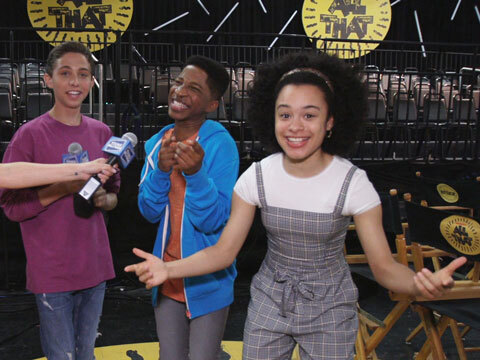 Back in the '90s, Nickelodeon's "All That" was the kid version of "Saturday Night Live" and helped launched the careers of Amanda Bynes, Kenan Thompson (who went on to star in the actual "SNL"), Nick Cannon, and Gabriel Iglesias. It was canceled after 6 seasons and rebooted for an additional 4 seasons in the early 2000s, and now it is back again for Season 11 with a whole new cast of fresh talent! Young Hollywood heads to the set of the revamped sketch show for a behind the scenes tour and chat with three of the new stars, Ryan Alessi, Lex Lumpkin, and Gabrielle Nevaeh Green! The threesome show us around to some of the sets being used for the show (which is taped in front of a live studio audience), including a coffee shop, a Bed Bath & Beyoncé, a Star Wars-themed set, and musical guest stage which doubles as a game show set! They also take us onto the high school set, which is actually the same one from the original series, plus they tell us what music they are into these days!