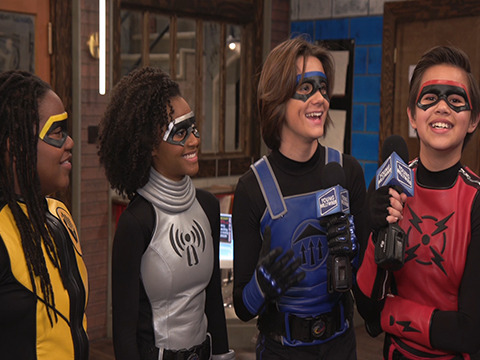 Cast of Nickelodeon's Danger Force Give Us a Set Tour

Nickelodeon's "Danger Force" is a spinoff of their wildly popular superhero series "Henry Danger", focusing on the continuing adventures of Captain Man and Schwoz as they recruit a new crop of super-kids to join their super gang! The first five episodes of the 13-episode first season aired earlier this year before the pandemic shut down production, but just like real superheroes, the cast & crew have pressed on, filming a special remote episode in quarantine and preparing to release the final 8 episodes later this summer/fall! Before the shutdown, Young Hollywood visited the epic set of the show where stars Terrence Little Gardenhigh (Miles/AWOL), Haven Flores (Chapa/Volt), Luca Luhan (Bose/Brainstorm), and Dana Heath (Mika/ShoutOut) gave us a tour of their SWAG -- that is, the Swellview Academy for the Gifted! Check out their version of a man cave, their sweet "mountain view", a SWAG classroom, and a possibly haunted closet! Plus the actors tell us about their characters' superpowers and their audition process!