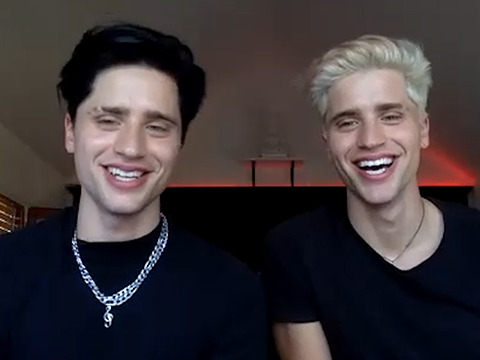 It can be hard enough for artists to find a degree of fame in their own countries; imagine trying to do it in a whole different country an ocean away! That's no sweat for the Martinez Twins, though. The talented twosome came all the way from Spain to be a part of Jake Paul's Team 10 group, and after gaining enough viral notoriety, they made a break on their own and haven't looked back as their success has only kept skyrocketing. Their YouTube channel now has a massive following, and they have been able to parlay their vlogs and prank videos into a music career. Young Hollywood joins Emilio and Ivan on Zoom, where they are in quarantine in their native Barcelona and still releasing new music. They tell us about the short film they made while in lockdown and spill the deets on the music video for their song "Paraiso" as well as their newest single "La Dieta"! They also reveal their dream collabs, plus they explain why they would never go to each other for dating advice and play a "Game of Lasts"!