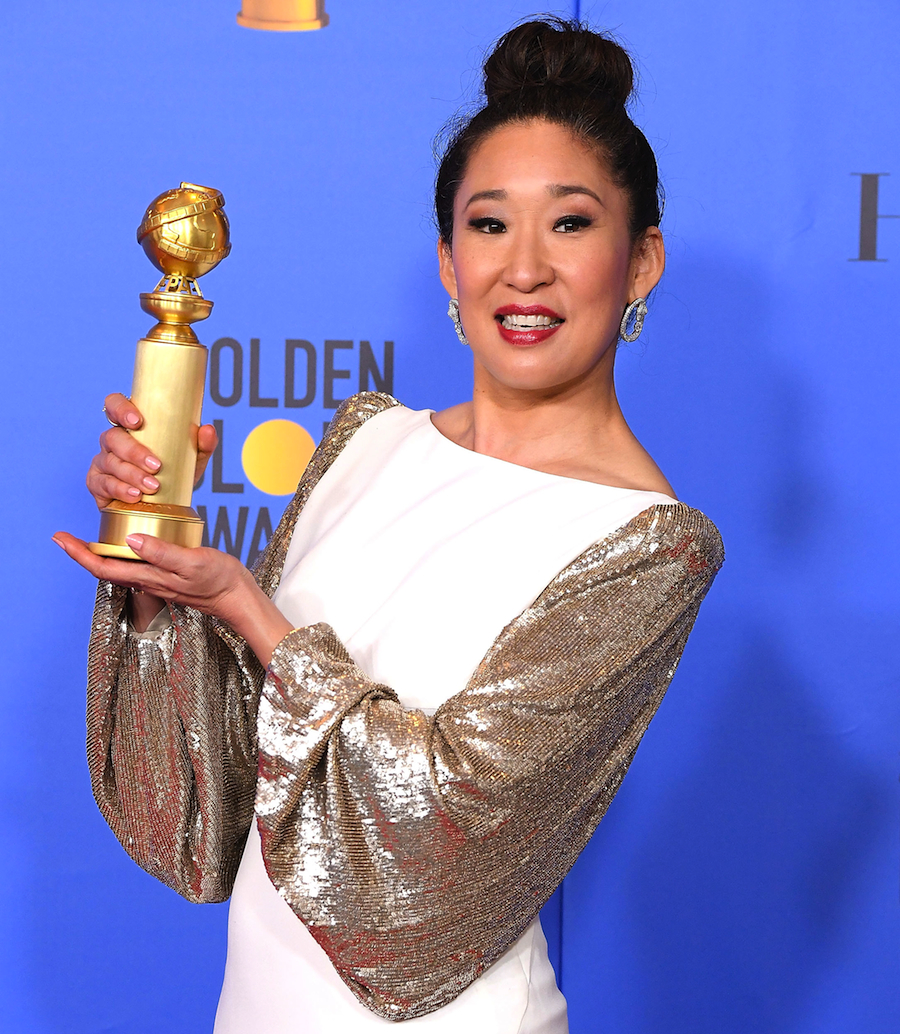 Boy Oh boy do we have an impressive woman for you today (see what I did there?)! This past Sunday, Sandra Oh hosted her first major award show alongside Andy Samberg and we haven’t been able to stop thinking about her since.

Born and raised in Ottawa, Canada, Sandra got her start early on when she was put into acting and ballet classes to correct her “pigeon-toed stance” (we all have our flaws, people). The acting bug certainly stuck and she continued to appear in plays and pursue drama throughout her years in school. Much to her parents' dismay, she turned down a 4-year scholarship in Journalism and instead enrolled in the National Theatre School of Canada, paying her own way through the program. After graduating, Sandra promised her parents that she would give acting a shot for a few years and if nothing came of it, she’d go back to school. Well, little did they know what an astonishing career was to come. She is still the only person in her family without a Master’s Degree, but I’m pretty sure she’s made up for it.

Sandra spent the next decade appearing in Canadian productions and stealing scenes despite her small roles in larger films. Critics quickly took notice of just how good she was, gaining traction for her portrayal of Rita Wu, an assistant to the president of a major sports agency, on HBO’s "Arliss". It wasn’t long after that she found the spotlight solely on her.

Enter Cristina Yang. In 2005, Shonda Rhimes cast Sandra as Cristina in a small little medical drama called "Grey’s Anatomy", you may have heard of it, and it quickly became a hit series and is now in its 15th season (with even more to come). She earned a Golden Globe for Best Supporting Actress in 2005 and a Screen Actors Guild Award for Outstanding Performance by a female Actor in 2006, as well as 5 Emmy nominations for her work as one-half of the dark and twisty sisters. In 2013, Sandra announced that the 10th season of "Grey’s Anatomy" would be her last, and tbh it has not been the same ever since she left (read: Sandra please come back we weren’t done with Cristina).

Somehow, she found a way to top her historic run on "Grey’s". In 2018, Sandra began a leading role in the BBC America spy thriller "Killing Eve" as an MI5 agent hunting down an elusive assassin. She is Eve, so here’s to hoping they don’t find a way to kill her anytime soon.

The series currently has a 97% on Rotten Tomatoes, and Sandra has been called the best actress currently on television… so yeah, I think that pretty much sums it up. Last year, she became the first Asian actress nominated for the Best Actress is a Drama at the Emmys, and at the Golden Globes on Sunday, she won the award for Best Actress in a Television Series Drama, making her the first Asian actress to win two Golden Globes (and all while hosting the show!). We stan a historic woman!

So there you have it, one of our most inspiring women to date. We have just begun to see the remarkable effects representation in Hollywood can have, so thank you, Sandra, for helping to lead the way. We love you!