Breaking Down The 3rd & Final Season of "A Series of Unfortunate Events", And How It Stacks Up Against The Books! 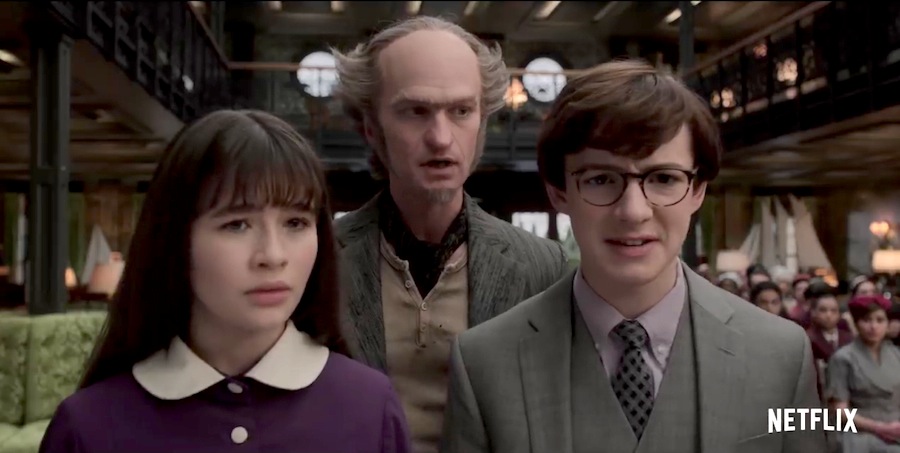 If you were like me, reaching the end of the A Series of Unfortunate Events novels was a perplexing, somewhat frustrating experience as a child. The Baudelaire children went through so many devastating experiences that, as a reader, I was expecting some kind of ending, whether happy or sad, albeit one with a definite conclusion. Instead, we got an incredibly ambiguous ending, and for years readers have had to remain content with the nefarious narrative’s ending. Until now.

The 3rd and final season of Netflix’s "A Series of Unfortunate Events" spans the last 4 books of Lemony Snicket’s catastrophic chronology:The Slippery Slope, The Grim Grotto, The Penultimate Peril, and The End. The season arguably offers the strongest set of adaptations in the entire series, boasting intricate, memorable sets along with answers to questions that have been long been asked by the series’ fans.

It wouldn’t be right to spoil just how the show ends, or even to hint at whether or not things turn out all right for the Baudelaire orphans. But we can offer a breakdown of the four episodic arcs, starting with...

The Season 2 finale ended with a literal cliffhanger, as Violet and Klaus were left racing down the side of a mountain with no way of stopping the mechanism they were traveling with. Sunny was left in a debatably worse situation, as she was in Count Olaf’s and his gruesome group’s clutches.

Immediately, the show kicks off with a bang, as The Slippery Slopestands as one of the series’ better pair of episodes (each book was broken up into 2 episodes for the show, save the final installment which stands as one singular episode). The slope itself is a terrific location, standing above some of the more forgettable settings of the 2nd season.

One of the best parts of the episodes is a character who didn’t get much attention earlier in the story: The Hook-Handed Man. Usman Ally gives on of the best performances throughout the entire show as the Hook-Handed Man, blending comedy, villainy and empathy together seamlessly, and his quality time with Sunny Baudelaire is heartwarming and one of the more memorable aspects of the season. The dynamic also gives his character unexpected depth, which elevates him above some of the other minor characters.

This is where things really get going. The Grim Grotto probably ranks in the top 3 adaptations in the entire series, up in the top tier with the classic Reptile Room. The setting plays out much like a horror film at times, whether in the dark, undersea depths or in the grim grotto itself. The episode also reveals the mystery of the submerged “?” that appears on the radar of the Baudelaires' submarine, though is never revealed in the books.

These 2 episodes hint at the larger mystery of the VFD, the schism that is destroying it, and the true intentions behind the death of the Baudelaires' parents. These installments carry a more substantial feeling of suspense than most other episodes, and there is an interesting mirror between the two “families” – that of the villains and that of the heroes.

Perhaps revealing more new knowledge than any of the previous adaptations,The Penultimate Peril weaves almost every dangling story thread and weaves them together into a terrible tapestry. While the setting of the Hotel Denouement is a bit similar to the setting of the Ersatz Elevator, it still stands as an intricate, physical embodiment of mystery. It’s highly entertaining to see all of the characters assembled in one place, and the enigmas embedded within the hotel itself create a compelling, self-sustained narrative within the 2 episodes.

The episode takes some risks, like revealing why Count Olaf burned down the Baudelaire estate, killing Bertrand and Beatrice Baudelaire. While it is nice to receive some kind of answer and closure to the question of why Olaf did what he did, there was always something tragic about the fact that the Baudelaire orphans never discovered why their parents were killed. It spoke to the way people die, and their loved ones are left with more questions than answers. It was a poignant detail, even for a book series aimed for children, and some of that was lost during the reveals in these episodes. Granted, these narrative changes do make for a compelling TV show, so this is more commentary than criticism. The backstory also does grant an emotional layer as to why Lemony Snicket is so invested in the case of the Baudelaire orphans, which has great payoff at the end of the show.

The actual penultimate episode also delivers an amazing new rendition of the beautifully melancholy song "That’s Not How the Story Goes", the unofficial anthem for the series, and the montage serves as a nice recap for the entire series. (Don’t watch unless you’ve the show to this point!)

The only book to receive a singular episodic adaptation, The End stands as one of the best installments in the series. There are very few mysteries yet to be resolved by this point, and those that weren’t in the previous episodes are in fact wrapped up by the end of, well, The End. The contents of the sugar bowl are revealed, and while the bowl served as an interesting symbol for the elusive answers of life that both children and adults pursue, the actual contents provide an interesting conclusion to one of the show’s more perplexing McGuffins.

What this episode lacks in terms of mystery is made up for by twisting surprisingly deep metaphors with the ultimate conclusion of the Baudelaire’s story, but narratively and emotionally. Set on an island with a beautiful blue and orange color scheme, the Baudelaires are faced with the prospect of living on the island forever, abandoning all the troubles of the world that have relentlessly plagued them. The siblings struggle with this decision, as they recognize that they wouldn’t be able to use their unique talents to make a difference in the world if they stay on the island.

This series finale also carries some heavy dramatic moments, and is layered with biblical allusions that propel the theme of knowledge versus ignorance, which is the basic conflict between the Baudelaires and the inept adults who fail to protect them. The show inspires children to challenge things that go against their internal moral compass, and that the key to growing up and surviving in our cruel world is to learn, develop skills, and apply these skills to positively impact society, instead of allowing tragedy to bring you down and continue to, as the show says, “fight fire with fire.”

Netflix’s "A Series of Unfortunate Events" stands as a strong adaptation and as a well-told, often emotional tale depicting how adults can enable children from being the best they can be, but that adults can also inspire the world’s youth through education, innovation, and culture. This strong message, along with the show’s intricate and fantastic set pieces, wonderful performances, and memorable characters make it a perfect watch for the whole family to enjoy.

The final season for "A Series of Unfortunate Events" is currently available to stream on Netflix.