'Wizard of Oz' Mastermind Getting His Own Big Screen Treatment 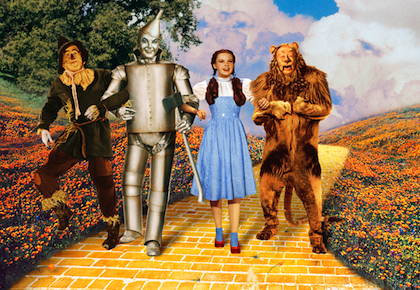 For those of you who don’t know who Frank L. Baum is, then I’m sure you’ve at least heard of his most famous work, The Wizard of Oz. It’s a timeless story about a young woman who is transported to another dimension by way of a tornado, meets and befriends a scarecrow, a man made of tin, and a lion, and on top of all of that  has to fight a witch whom she vanquishes with a bucket of water… Yeah, that old chestnut. One can imagine that the guy behind all of this stuff must’ve had a pretty crazy life, right?

Baum worked a lot of different jobs to support himself before finding success with The Wizard of Oz, including a poultry breeder, a traveling salesman, and an import store owner. He floated between quite a few completely different things it seems. Luckily, he did find success after he wrote The Wizard of Oz, which isn’t just an extremely trippy story but is also layered with commentary of the government and it’s gold standard during the late-1800s/early-1900s. He also stirred up some controversy by being an early advocate for feminism.

The film is set to be entitled The Road to Oz and has a lot of important people in the film industry behind it. For starters, Josh Golden, a 2014 finalist for the Academy Nicholl Fellowships in Screenwriting, has already written a script. The film will be produced by Beau Flynn, who has produced such films as The House of Yes, Requiem for a Dream, and Journey to the Center of the Earth. No word on the cast of the director yet, however.

A fun fact about The Wizard of Oz and Baum himself: When the costume department for the 1939 MGM production went looking for a coat for the Professor Marvek character that Dorothy meets right before the tornado, they found an old tattered coat at a thrift shop and thought it would be perfect for the character. Turns out, the coat used to belong to L. Frank Baum himself! Whoa! Will there be any mention of this in Road to Oz? Probably not, but this sounds like one awesome biopic.