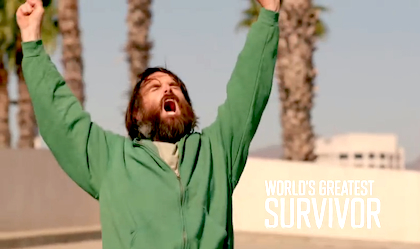 Comedian Will Forte may like his idea of being the last man on Earth, but his career is about to make him a lot less lonely. So far, Forte’s latest television series, and the first one that he has created and starred in, is taking off like nobody expected. Sure, “The Last Man on Earth” has only been on for two episodes (or was that one extra long episode?), but the people have spoken, and they like it a lot. Add in the fact that Forte’s only co-star on the show is the talented and brilliant comedienne Kristen Schaal, and then you get “how could anybody NOT like this show?”

So, what is “The Last Man on Earth” about? Well, it is literally what it sounds like it’s about… the last man on Earth. Forte plays the character of Phil Miller (named after the show’s producers and writing/directing team behind Cloudy with a Chance of Meatballs and 21 Jump Street, Phil Lord and Christopher Miller), a 40-something-year-old slacker whose career focused on temp work before a virus wiped out the rest of humanity. The show follows his adventures of living in a world with no other human life around as he plans to live out the rest of his days in his home town of Tucson, Arizona.

If you haven’t seen the show and are thinking, “How could anybody watch a sitcom that is essentially a post-apocalyptic version of Cast Away?”, that’s exactly where Kristen Schaal steps in, as the last woman on Earth. Schaal plays a character named Carol Pilbasian, who, despite being like the whacky characters Schaal is known for playing, has more strait-laced tendencies and societal rule followings than Phil, so the two clash. The kicker is that they must make a choice to either be alone for the rest of their lives, or work together and try to rebuild society… by doing it and making babies.

What does the future hold for Phil and Carol? Will other characters slowly join them like on other post-apocalyptic shows like “The Walking Dead”? You’re going to have to tune into “Last Man on Earth” to find out. (But fellow “SNL” alumni Jason Sudeikis is seen in a picture, so he could show up in the future or in a flashback.) One thing about the future that Forte has alluded to is that his feature film based on one of his more popular “SNL” character, MacGruber, is gearing up for a sequel. Some people on the internet were buzzing after they took this quote by Forte from the red carpet premiere of “Last Man on Earth” -- “In a couple weeks, when post-production is over, I’m gonna get in there.” So, of course, many people on the internet thought for some reason he meant MacGruber 2’s postproduction, and, like Boyhood, was filmed in secret. (I wonder if anybody thought they started filming after MacGruber in 2010 to show Forte age over a five-year period?) It has been confirmed however that the quote was indeed misinterpreted according to a representative of Forte. So, to let everybody know, there is no way the MacGruber 2 was already made in secret. (MacGruber 3 is another story...) Before we go on, though, check out the trailer for the first MacGruber:

The real fact about MacGruber 2 is that a script is done and it is Forte’s number one priority right now. Does that mean that he’s letting “Last Man on Earth” take a back seat? Hell no! The show has at least nine episodes to run for the first season, meaning that it’s probably already shot, especially if post is wrapping up in a couple of weeks. Also, Forte couldn’t be happier with the project; he says that he is still happily surprised with Fox and how they haven’t tried to change the show around. He always thought “Last Man on Earth” was going to be a cable show, since it is admittedly weird for a network show, but weird in a good way!

Check out the promo for "Last Man on Earth" below, wherein Phil discovers, that, with no other people around, he is World's Greatest Everything!