What It’s Like Being a Plus-One At Revolve Fest! 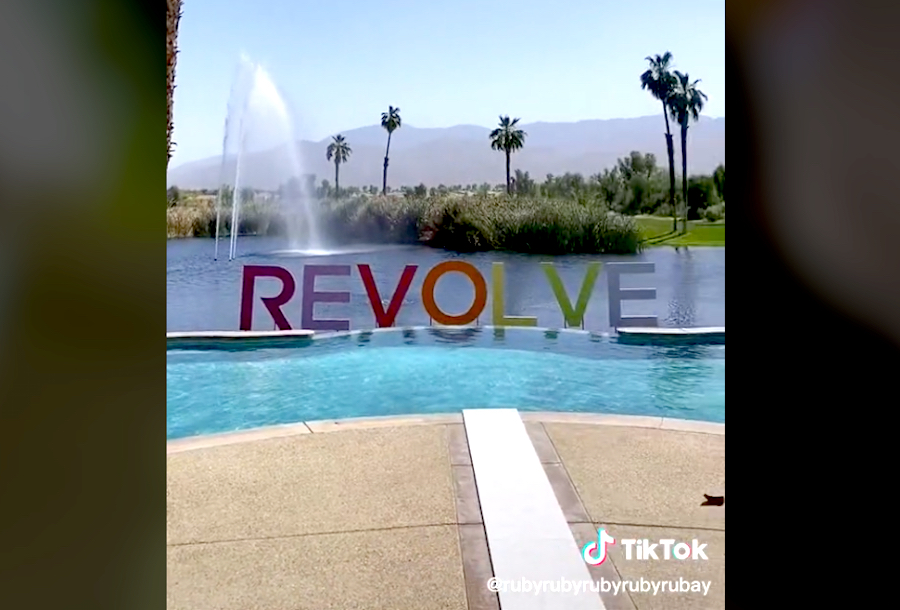 If you’ve been on the internet the past few days, there’s a chance your feed has been flooded with pics from Coachella as well as Revolve Fest. It might have you curious as to what it’s like to be at this uber exclusive event? It also might have you wondering, what is the difference between Coachella and Revolve Fest? Well, all your questions are about to be answered thanks too Ruby Saracino. Saracino, a native New Yorker, got the invite to Revolve Fest as a plus-one by her "Bachelor" alum bestie Kit Keenan. Ruby decided to document her journey on her TikTok account @rubyrubyrubyrubyrubay, and the content is worth the watch. Here is all the inside scoop we got from Ruby!

If you thought your favorite influencers were arriving the day of Coachella, you were wrong! Ruby shared that they arrived in L.A. days before the event for pre-Coachella festivities. Ruby and Kit checked into the Mondrian two days before the event and spent the day working, eating, and shopping. In the evening, they went to the Revolve Paris Hilton Party -- cue the FOMO!

@rubyrubyrubyrubyrubay Is this quality content or am I just delirious because I woke up at 6 AM? #coachella♬ original sound - Ruby Saracino

Day 2: Hard Work Being a Plus-One

On the second day of being a plus-one, Ruby got to go to the Camila Coelho luncheon where she showed followers what it’s like to actually be there. We got to see behind the scenes of influencers making TikToks and all the yummy food that Ruby said “no one ate.” Then she shared that they did some unboxing, but it was all just for Kit since Ruby’s a plus-one. That night, they went to another party, and she ended the night making a TikTok!

On Day 3 of being a plus-one, the Revolve gang actually headed to Palm Springs for Coachella and Revolve Fest. Ruby started her day getting her steps in and then picked up some snacks for the bus ride down to Palm Springs. She shared a video of everyone with their luggage trying to get it on the bus, noting, “if you’ve ever seen influencers having to do things for themselves it’s funny.” We are pretty sure she’s being sarcastic, but either way, it made us chuckle. Once they arrived in Palm Springs, they checked into Hotel Revolve, which is literally adorable, and went to went to Coachella that night!

On the 4th day of being a plus-one, they started the day by going to the gifting suite. For those of you who don’t know what a gifting suite is, it’s basically a room with a bunch of clothes and products, and influencers can take whatever they want. Ruby described it as a madhouse and that “you’d think these people have never seen clothes.” Then Kit got glam, and Ruby did not because, again, she is a plus-one. Next, they went to the Revolve pool party, which was gorgeous, but she said it was kind of boring because everyone was just making content.

On the 5th day of being a plus-one, Ruby witnessed people getting IVs so they would be rejuvenated for the day. Next, they got ready for Revolve Fest and shot some content. Once they were at Revolve Fest, Ruby showed followers what everything looked like! The first thing they did was go to the press area so everyone could get interviewed about their fits.

By Day 6, Palm Springs had taken its toll on Ruby as she started to lose her voice. Ruby and Kit started their day by wearing matching outfits to shoot some content. Ruby shared that the day was less “plus one energy and [she] was very in the content", and we love that for her! After that, they hung out by the pool where she had the “best frozen lemonade”. Finally, they ended the day by going to the airport, where unfortunately their flight was delayed, but they did make it back to New York!

If you want to know even more about what it’s like to be a plus one at Coachella, check out Ruby’s TikTok account. There she has so much more content about it and answers questions from curious followers!