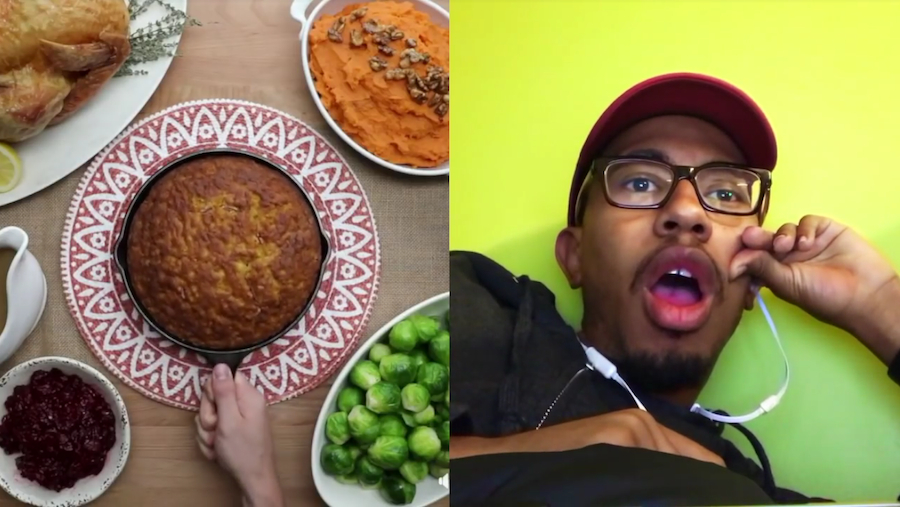 At this point in the Internet’s evolution, I feel confident in saying we’ve all seen some questionable recipe videos. You know the ones I mean, those videos that seem to pop out of nowhere on your Facebook, and you watch because what else is there to do? They’re usually somewhat interesting and then you move on, except for those few that stop you in your tracks. It seems as if some people are purposely putting out sketchy, sickly looking recipes for attention, or notoriety, or whatever reason. Well, one man burst onto the scene last Fall and put our shock and queasiness into words. Kalen Allen, a student at Temple University in Philadelphia, reacted to one of these videos and posted it for a friend to see. The next thing he knew, the video was everywhere.

This video resonated with so many people because it’s obviously hilarious, but I also think it was cathartic for a lot of us. It was like someone finally recognized that we’ve been at the mercy of these confusing recipe videos for so long, and someone was finally ready to say something about it. Few 2-minute videos can make me laugh out loud multiple times, and this is one of them.

Ms. Ellen Degeneres herself took notice of the hysterical and outspoken Kalen and invited him to be on her show. Little did he know, she had a much bigger opportunity waiting for him. She invited him to be a contributor to the show, and now he appears every so often on "Ellen", providing his spot-on commentary to food videos, fashion shows, and more. You can watch the moment this happened here:

From reaction videos to his own segment, called "OMKalen", you can see what the power of your personality combined with the magic of Ellen can do, recently taking Kalen all the way to Australia!

I’d say Ellen has made a very very good decision by taking on Kalen Allen. I can’t wait to see what more comes from this aspiring actor/entertainer, but I also hope the recipe reaction videos don’t end anytime soon. The Tasty moment may have passed, but we still need a voice of reason for when any sort of outlandish video tries to come into our lives and make us question what is acceptable cooking.