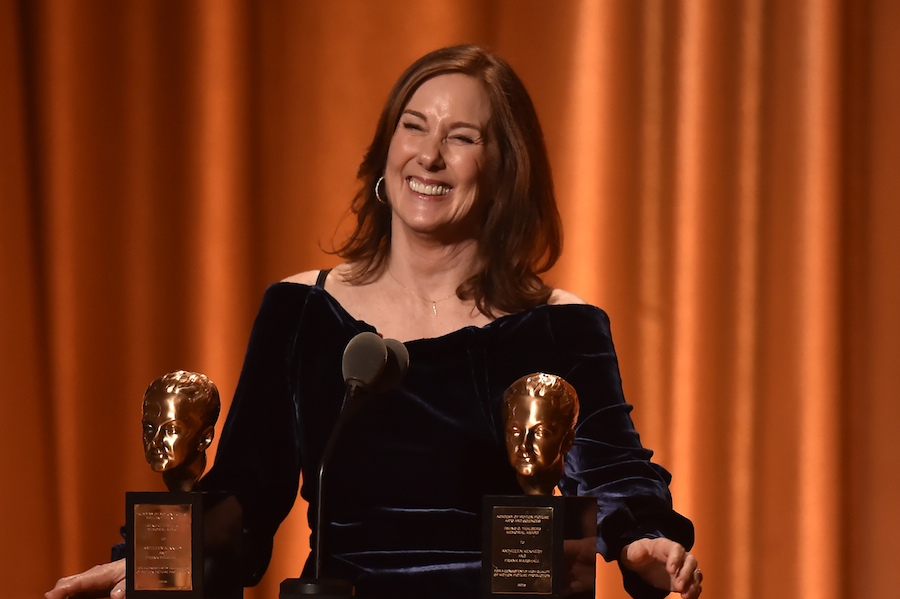 Okay, people, pay attention because this one is important. This week’s Women We Love spotlight is on one of the most influential and powerful ladies in the industry, and you might have never even heard her name before. I’m talking about Kathleen Kennedy, President of Lucasfilm, reviver of Star Wars, all around boss, and now honorary Oscar winner.

Kathleen’s career is nothing short of impressive. She climbed the ladder of success quickly in a male-dominated trade and is now right on top, but let’s start at the beginning. Kathleen studied film in school and worked behind the camera in TV production right out of college. Soon, Steven Spielberg scooped her up as his assistant and so began a producing partnership that would forever change the film industry. Spielberg introduced her at The Governors Awards (also known as the honorary Oscars) over the weekend and said, “She went from taking notes to taking over,” describing Kathleen’s rise from assistant, to producer, to president of one of Hollywood’s biggest studios.

Kathleen has now spent more than 3 decades making some the biggest titles in the world. The list of movies she’s produced include E.T., Jurassic Park, Indiana Jones, and Schindler’s List, just to name a few. She is a box office icon having produced or executive produced over 70 films which have together garnered more that 120 Oscar nominations. Yeah, take that in.

And that’s not all. In 2012, her good friend George Lucas called her up wanting to meet. Kathleen thought they were just catching up; instead, he told her he was stepping aside from his role as president of Lucasfilm and he wanted her to take his place. If you don’t know, George Lucas is the mastermind behind everything Star Wars and one of the most powerful people in the entire industry (you should really know who he is), and Kathleen was his first choice when entrusting the history and the future of the world’s biggest franchise to someone new.

Who run the world? GIRLS.

So with that, Kathleen Kennedy took over and Star Wars was reborn. In the 6 years since she showed up on the Lucasfilm scene, she has released four new Star Wars movies, which include 3 of the highest-grossing movies in cinema history and delivered A scores from audiences and critics. And there is still more to come. Kathleen is looking to hit a $6 billion benchmark with the remaining Star Wars films, one of which, Star Wars: Episode IX, is currently in production and set for release in December 2019. She is bringing in bank.

Last weekend at the honorary Oscars, Kathleen became the first woman to receive the Irving G. Thalberg Memorial Award – which honors achievements in producing – along with her husband and producing partner Frank Marshall. In her speech, she emphasized the need for a more diverse range of voices in the industry: “We all know changes in the industry should be embraced, must be embraced, because our industry changes who gets to tell their story.”

So, we’re telling Kathleen’s story in hopes it inspires other girls out there to chase their dreams, no matter how far off they seem. You never know, you could end up the President of one of the biggest studios in the world. Thanks for showing us how it’s done, Kathleen, we love you!