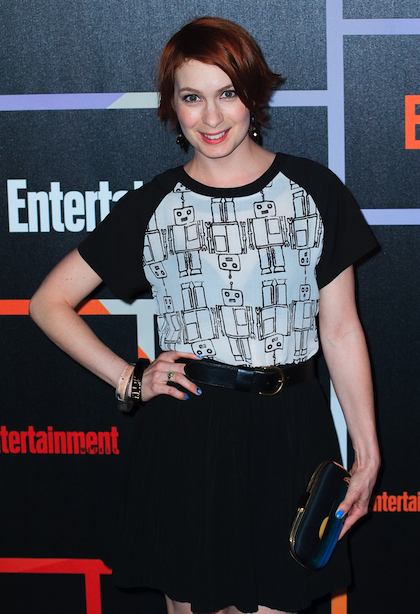 The question of the day is, do you know Felicia Day? Well, if you’re a geek, it’s like asking if you ever go on the Internet. But for those of you geeks and average joes who have never heard of Felicia Day, I’m going to tell you people all about this redheaded Princess of Geekdom!

Felicia Day operates her own web content producing company, Geek & Sundry. They have a website, a YouTube channel, and collaborations with many different companies and platforms. Geek & Sundry is a great tool to learn about things you may not have realized before that you might have interest in, as well as provide non-stop entertainment. It’s one of my favorite places to go on the Internet. On top of their own original web shows, they have series about video games, fantasy/sci-fi novels, comic books, movies, and even board games! It’s really got something for everybody, because everyone has got a little geek to him/her.

I can personally attest to Geek & Sundry’s skills at turning people onto hobbies they may not have known they would actually like. One of my roommates watched the Wil Wheaton-hosted board game show, “Table Top”, in which Wheaton invites his famous friends to play board games with him and shows viewers at home how to play them. Most of the episodes of “Table Top” I have seen, Wheaton has lost, and normally pretty badly, which is hilarious because, most of the time, he’s the only one who has actually played the game previously! My roommate has watched pretty much every episode of the show, and as a result, we get square packages delivered to our house nearly every week from Amazon, and I’m bombarded by constant invites to Game Empire in Pasadena. I can’t complain, though; he buys and I play for free! But I digress, this is not about Wil Wheaton and my not-famous roommate -- this is all about Felicia Day!

Before Felicia founded Geek & Sundry, she was a struggling actress living here in Los Angeles. She left her home in Huntsville, Alabama, at age 16 to study mathematics and musical performance at the University of Texas at Austin, where she received a scholarship for her exceptional violin playing. She’s quite a talented smarty. In Los Angeles, Day pursued acting and even landed a job on the final season of one of my favorite shows growing up, “Buffy the Vampire Slayer”. On “Buffy”, she played the role a potential vampire slayer named Vi for eight episodes.

On top of acting, Day also wanted to be a writer, so she joined a writing group in Los Angeles. Her main problem with writing, though, came from a crippling addiction plaguing people of all ages today that she began developing in childhood, but came out in full force in adult with the release of the massively popular multiplayer online role-playing game, “World of Warcraft” (WoW). That’s right, she has a pretty big video game addiction. Coming to the realization that the video game was taking up much of the time she could spend writing, Felicia turned her addiction into a comedy webseries entitled “The Guild”. The series follows a group of completely different people that constantly play with each other in a game similar to WoW and get into ridiculous situations. They all go by their in-game avatar names, even when interacting outside of the game. “The Guild” put out weekly installments lasting any where from 3 to 12 minutes for 6 seasons. It became largely popular amongst the Internet and video game community, and served as the starting point for what would become Day’s online empire, Geek and Sundry. “The Guild” is available in its entirety on Netflix, with each season put together and feeling almost like a movie, as well as giving the viewer the fun of seeing how the budget went from shoe-string in the beginning to seemingly limitless by the end.

Felicia Day’s online influence didn’t stop there. Do you remember that silly little period in 2008 when television production went up in flames because the writers went on strike? During that time, “Buffy the Vampire Slayer” creator Joss Whedon created a musical webseries starring Neil Patrick Harris and Nathan Fillion entitled “Doctor Horrible’s Sing-A-Long Blog”, which follows the villain Doctor Horrible as he tries to win the affections of a girl named Penny -- played by Felicia Day. Fillion co-stars as Captain Hammer, the hero who also wants to win the affections of Penny. Whedon had not only sought out Day to act in it but has said that the way “The Guild” was set up is a direct influence on why he made “Doctor Horrible’s Sing-A-Long Blog” into separate installments.

If you think that Day’s Internet presence ended there, you can bet your behind-that-hasn’t-left-your-computer-chair-in-months that you are mistaken. YH caught up with her in Las Vegas for an interview on the INTERNET where she spoke about Geek & Sundry, cat videos, and chainsaws!

Today, on top of running Geek & Sundry and producing all of its content, Felicia Day can be seen acting in different television shows, movies, webseries, and providing her voice in video games. Geez, she is one busy, hardworking geek… Wait, does that make her a nerd?